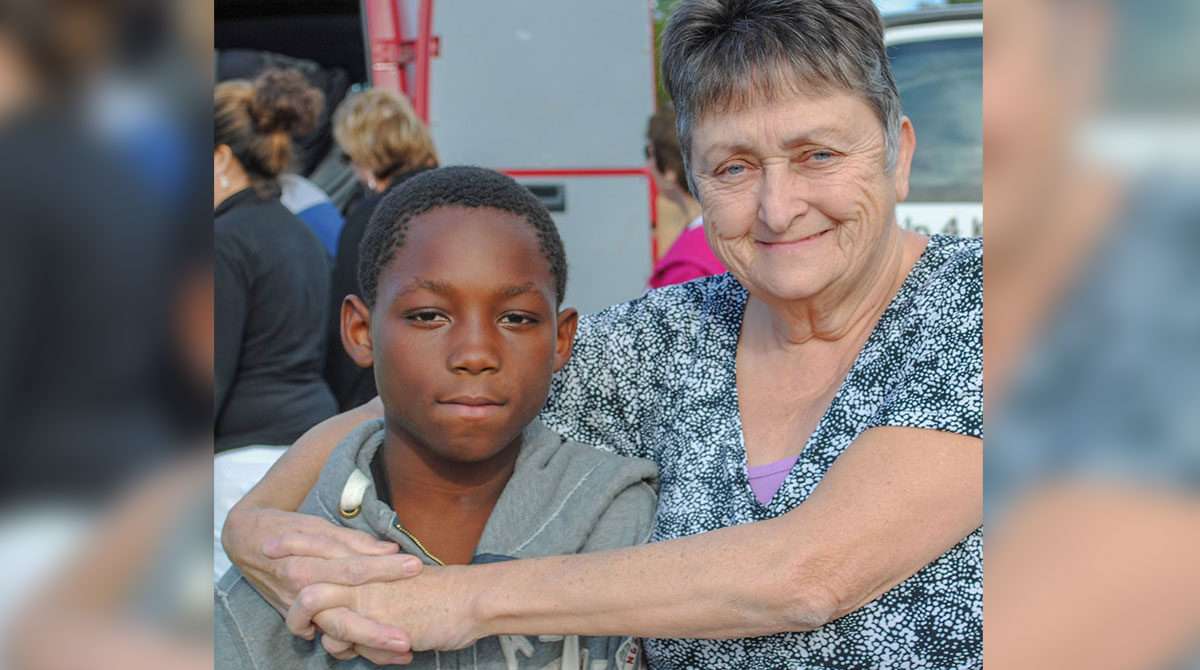 Every year on her birthday, Barb Mains asks Jesus for 30 more years, she said. She needs those years to continue her work helping needy children in Horry County, S.C., through her nonprofit Help 4 Kids/Backpack Buddies.

In September 2019, it will have been 30 years since Barb, her sister Aileen Page and now deceased friend Lee Dougherty reached out to help families devastated by Hurricane Hugo. What they found in rural Horry County shocked them. Not only from the wrath of the hurricane but simply from low wages that caused families to struggle financially, there were children who were hungry and who had little to no school supplies or good clothing or shoes.

Without even realizing it, the three female volunteers started a movement that has grown into a recognized nonprofit that helps feed and support thousands of children annually.

Born one of eight children, Barb said she grew up “right under the Blue Ridge Parkway near Mount Mitchell.”

“I had a regular childhood with a wonderful mother. We were poor but you really didn’t know you were poor because everybody was in the same boat,” she said.

As soon as she was old enough, however, Barb left her Yancey County home for the city life in Asheville. After marrying, she eventually ended up in Myrtle Beach when her Florida born husband, Toby, wanted to move closer to the beach.

“I had lived here for 10 years before the hurricane came and had not ventured out into the county,” Barb said, “so I had no idea of the conditions on the backroads.”

The homes of the three women were not damaged during the massive September 1989 storm so they connected with rural health nurses to help in any way that they could.

“It was totally like going to a third world country,” Barb said of her first visit into the outskirts of the county. “It was just bad. I will never forget my first time out on a dirt road where the health department had set up port-a-johns in the cul-de-sac. These people didn’t really have anything to lose already and now their old trailers were missing tin roofs that had blown off and they had nothing left.”

GROWING A VOLUNTEER BASE

Barb said as she, her sister and friend kept working and seeking donations, their volunteer base kept growing as well.

“We just kept on and when people would join up, we kept going, and going and going and things got bigger and bigger,” she said. “To begin with, we dug deep and did it ourselves but as people learned about us, they began to help with donations. To this day, our donations come from individuals, churches and businesses and we get what we need.”

Within four years, the group of volunteers had grown large enough to seek and earn a 501(c)(3) nonprofit status. Today, Barb said Help 4 Kids operates with a 100 percent volunteer base of about 100 individuals and does not need to seek additional volunteers because so many stick with the organization long-term.

“Miss Lee stayed 19 years until she passed and we have Maria Limon who has been with us 28 years. I love each and every one of our volunteers and some of them are not much better off than the people we help,” she said. “But they want to help.”

And, they are true volunteers, including Barb, who said there is not a single paid individual in the organization.

“There are no salaries, no compensation. We have stuck to three things we decided on initially and they are: no one would ever get paid; everything we received would always go to the people who need the help; and the volunteers would not take the donations for themselves.”

Doing the work without financial compensation, Barb said, has been the way things have worked and her husband was a big part of the support network until his death three years ago.

“If we got a million dollars today, still no one would get paid,” she said. “That has been our thing and we have managed.”

As needs began to be defined, Barb and her volunteers realized there was more needed than just food, although that is a huge part of their program. The Backpack Buddies part of the program developed as Help 4 Kids worked with the schools in the county to identify children who were coming to school hungry.

“Kids were going to school on Monday tired, irritable and plain miserable and we began to realize they were hungry because they had not eaten over the weekend,” Barb said.

With the help of teachers who identify children qualifying to receive free breakfast and lunch, the volunteers today pack 2,800 lunch bags a week. Then the Knights of Columbus of St. Michael’s Catholic Church delivers those bags to the schools in the county. Each school identifies how many bags are needed.

“I wish people could realize how many kids in this one county are hungry. If you don’t see it, you don’t think about it. The kids have no control. There is nothing they can do about it. Many parents are working for minimum wage and if a car breaks down or something else happens that upsets the budget, they can’t make it up. They are never going to have enough money to make it up so sometimes they even become homeless.”

Help 4 Kids does more than just provide food during the school year. During the summer hundreds of sandwiches are made and sent to those “pockets” in the county where need has been identified. Last summer, 2,000 sandwiches were provided and enough given to each child to last a week because they would no longer be getting breakfast or lunch at school.

“I know we can’t reach them all in the summer and it just breaks my heart,” Barb said.

While making sure children eat is a top priority, encouraging education and helping kids get to college are also priorities.

“The first thing we do is feed them, then we can encourage them to go to school and get out of their conditions so they can have a life,” Barb said of the children. “When they are young, we start telling them education is their way out. We say make good grades and we will help you.”

In fact, the assistance goes beyond high school. Scholarships, she said, do not include hygiene items or books that can be very expensive and the organization helps the students until they finish college.

“For everyone who graduates, it is another one that escapes their conditions,” she said.

Everyone can help, Barb said, adding that her hope would be that when parents start shopping for school supplies, they remember those children who will not be able to shop.

“Buy an extra book bag or a couple of outfits. It would make a big difference in the life of a child,” she said.

At age 71, Barb said she has no intentions of quitting her volunteerism but she has developed a contingency plan that would allow a younger, trained volunteer to take over the organization leadership if anything happened to sideline her.

“I feel young. People would ask me over the years if I was ever going to quit and have a life,” she said. “But I said no. When you have all these children looking up to you, it would be like leaving my grandchildren in the parking lot. It is not a job. It is not a chore. I look forward to it every day.”