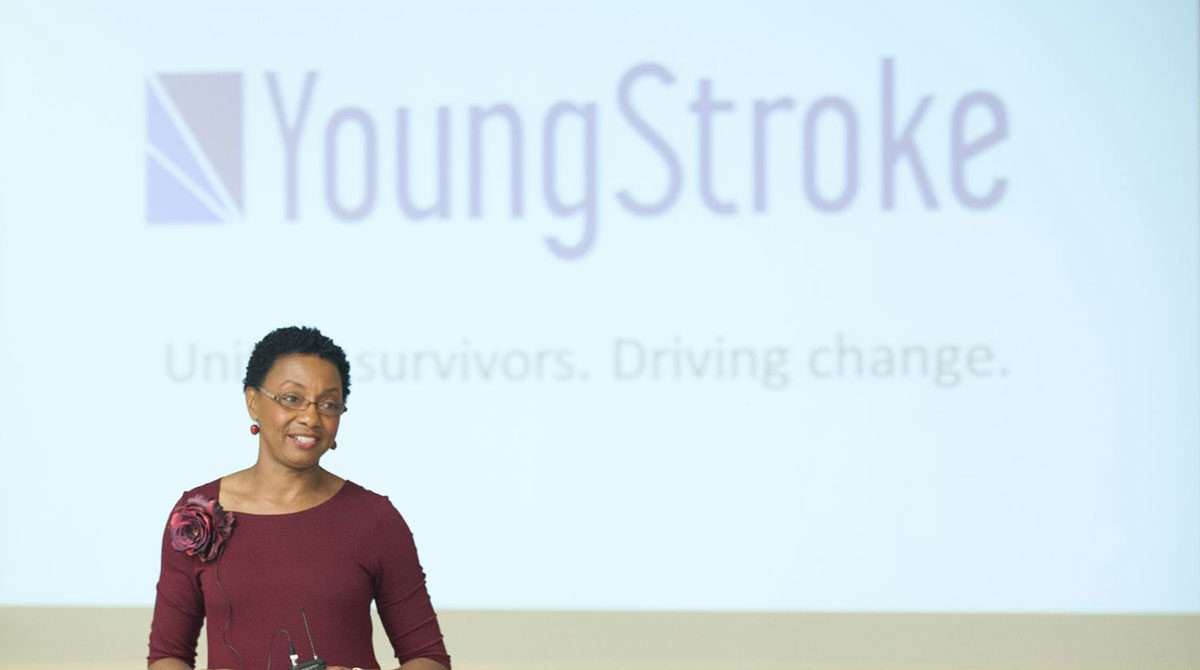 A personal health crisis at age 43 changed the course of Amy Edmunds life forever and prompted her to spend the greater part of the last two decades advocating for young stroke survivors.

The founder of YoungStroke, Inc., Amy found she was one of many young stroke survivors. To her dismay, however, she learned there was very little communication on a national level about stroke occurring in young adults like herself.

Amy grew up in Halifax, Virginia, the youngest of three children. Her father was a self-employed cement finisher and her mother was a stay-at-home mom until Amy entered elementary school. Her mom then became a teacher’s aide so she could remain by her daughter’s side. Not unlike what Amy found herself doing later in her life, her mother was an activist for others’ rights.

Amy said her mother was involved in the National Welfare Rights Organization, an initiative in the 1970s in America that fought for the welfare rights of people, in particular women and children, with the goals of ensuring “adequate income, dignity, justice and democratic participation.”

“What I remember most about my mom’s volunteer work,” Amy said, “was that she once worked with the census. I recall riding around with her and that was an enlightening experience to see the conditions people were living in.”

As Amy went off to undergraduate school at Davidson College in North Carolina where she majored in public policy, she found that institution to be very encouraging of service.

“We were encouraged to contribute to the greater community,” she said.

As a member of the third class of women enrolled at the predominately-male college and the single minority female in her graduating class, Amy said she and others were befriended by the custodial staff.

“We appreciated the support and nurturing we received and we lobbied successfully to give them a day of recognition,” she said.

After Davidson, Amy worked in sales management with a staffing company until she opened her own staffing business called Interview Etiquette in Charlotte. She later moved to Washington, D.C., where she suddenly and very unexpectedly had a stroke on Jan. 11, 2002.

By the end of the same year, Amy had enrolled in Murray State University in Kentucky to pursue a master’s degree in organizational communication with an emphasis in health organizations.

“I was never symptomatic of stroke,” she said. “I never smoked, didn’t drink alcohol and didn’t have high blood pressure or a family history of stroke. I exercised, even ran 5K races. So it was quite a shock to me and my physicians that stroke happened.”

Luckily, for Amy, her stroke was unusual and did not require rehabilitation. Her deficits, she said, were not physical with the typical slurred speech or loss of mobility. The stroke, however, did leave her with some memory loss and some post-stroke fatigue that caused her to sleep for hours.

“My doctors and I all agree that one reason my outcome was so fortunate is because I carried such a healthy body into that medical crisis. I wasn’t diabetic or obese and didn’t have a lot of unhealthy habits that would have impeded my recovery,” she said.

Amy said she was interested in trying to understand her experience as an otherwise healthy person.

“It was quite a mystery for me and my doctors didn’t understand. That propelled me to notice that there really wasn’t a voice for young adults who experienced stroke,” she said.

So Amy, determined to research all she could about stroke in individuals younger than 65, based her master’s thesis on the subject.

“My thesis was “Communication of Social Support to Young Stroke Survivors in Western Kentucky,” she said. “By social support, I mean the way we would communicate health messages about services and resources within the community to help these young adult stroke survivors.”

She founded YoungStroke, Inc., as a way to advocate for change that would include statistics about young adult stroke in health reports and provide more resources for the individuals who have very different needs than geriatric stroke survivors. She spent her off-work time speaking to groups and at conferences where she said it took 20 minutes of her 30-minute talk to explain what young stroke was as a medical condition because there was so little public information, so little education about the topic.

It was not until Mary George of the Centers for Disease Control published a study in 2011 about young people experiencing stroke that Amy’s work became more credible and more validated, she said. By then, she had accepted a full-time teaching position at Coastal Carolina University in Conway, S.C., where she is a senior lecturer in the health sciences department.

Amy’s work on young stroke has involved her in significant changes in the way young adult stroke is viewed. She has successfully lobbied the S.C. Department of Health & Environmental Control (DHEC) for inclusion of statistics describing the prevalence among adults under age 65 on state fact sheets.

“That was significant because DHEC serves as the state reservoir of health information,” Amy said. “Each year fact sheets for stroke and other diseases provide statistics on how health across the state is impacted. Young stroke survivors have very distinct needs. I was able to successfully argue before some of the leadership at DHEC that those young adults deserved to have their stats identified. By doing so, we tried to argue for resources, to make legislators aware of the needs and how stroke was impacting those young adults.”

Amy said without statistics, legislators could say the issue was not important. “You have to be counted,” she said.

She said when stroke occurs among young adults, it is impacting them during their key earning years and can impact them financially. She said it creates a social and economic burden to taxpayers.

Amy said she was able in 2017 to collaborate with PowerPhone, a company that trains emergency dispatchers, to create a nationwide, online course about stroke among young adults.

“Even in my own personal situation, they [emergency responders] never assumed I was experiencing stroke due to my age,” she said. “The symptoms are not always textbook and I looked very able bodied. I had temporary blindness but it had gone away by the time help had arrived.”

Because she seemed ok, emergency responders refused to transport her to the hospital. It was thanks to her mother being there, that she got to the ER to receive help. Even then, she appeared so normal she was left to wait in the lobby for three more hours.

“That could have been tragic for me,” she said, adding that the TPA (tissue plasminogen activator) treatment that can help save a stroke victim’s life must be administered within a four-hour timeframe.

Over the years since her stroke, Amy has traveled the world with her message. She has been invited to speak at some of the largest global venues in stroke care, including the World Stroke Congress/European Stroke Organization Congress, International Stroke Conference of the American Heart/American Stroke Association, the International Stroke Genetics Consortium and the American Congress of Rehabilitation Medicine, among others.

She is the first American stroke survivor elected by international peers to serve on the Board of Directors of the World Stroke Organization, serving a term from 2014 to 2020.

“An exciting part of being on the board was when stroke became reclassified by the World Health Organization,” Amy said. “For 62 years, stroke was classified as a cardiovascular disease. As of last year, it has been redefined as a neurological disease.”

Amy said this is very significant for how survivors will gain access to therapy.

“Now that will be less of an issue. It is an exciting time and more focus is being given to the post-stroke experience. We’ve had a lot of focus on acute care—getting inpatient care quickly—but we have not had such great performance in providing services once discharged,” she said. “Once home, they are really at the mercy of the caregivers’ ability to navigate finding resources. That is a whole other burden.”

She hosted the first international conference to exclusively address stroke among young adults in Jacksonville, Fla., in 2015 and 2016. This event was supported by the Mayo Clinic and resulted in the development of a Young Stroke Questionnaire, a patient outcome assessment tool, in collaboration with the University of South Carolina in 2019.

Amy’s work has helped keep the topic of stroke among young adults “front and center” among the research community, she said. When her academic calendar allows, she continues her advocacy through YoungStroke, Inc. and while now caring for the aging mother who was there to take care of her during her stroke recovery.