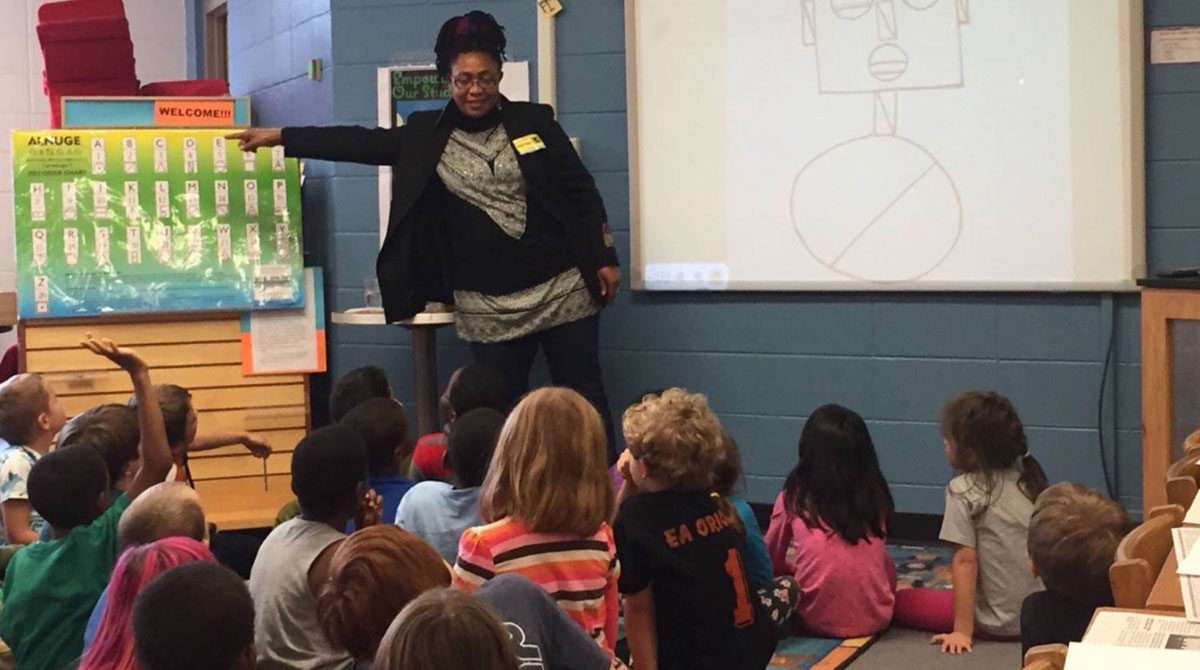 Cleaster Cotton is passionate about uplifting underprivileged children who may have never heard the words “good job.” Through her art, the Asheville, North Carolina, resident and contemporary primitive artist reaches out into the community to provide avenues for both children and adults she believes have been made to feel “less than.”

Cleaster, an Indigenous Black American, feels called to speak the historical truth about the treatment of her ancestors and the continued racism she sees in America today. Artist, educator, inventor, author, writer and photographer, she shares of herself generously, moving fast with art exhibits, speaking engagements and developing ways to empower children–with the lion’s share of her time going to African American and Latin youth.

There is one very important aspect of Cleaster’s life and that is she feels she has the ability to read what a child needs.

Growing up in the heart of Brooklyn, New York, in a large and close-knit family, Cleaster (whose name derives from an ancient African language meaning Bright Star) said there was never any doubt in her life that she was loved, protected and supported.

“I came from a family where I experienced love and I didn’t know how rich that was until I grew up. I had friends who came from well-off families but they always wanted to come to my house to play and I wanted to go to theirs. They had pianos and things I did not have,” Cleaster said. “But the richness I grew up with was love. When I was a little girl, my life was filled with music, song, dance, good food and laughter. On Friday night gatherings at my house, everyone got a chance to perform their talent in front of the family. I remember going up there and dancing. During the big applause, a relative would pick me up, look me in the eyes and say, ‘That baby can dance! Good job!’ That’s what I was filled with. It built me up as a person.”

Those memories of her own happy childhood and the looks in the eyes of others less fortunate make her an expert, she said, in knowing what a child needs.

“I know the look of hopeless and surrender in the eyes of some of my friends who did not make it out of our inner-city community alive. They had that hopeless look. I stayed hopeful and strong. So, I cannot stop at the end of a normal work day. I have to go that extra mile,” she said of her work in the community.

Also instilled in her at an early age was the love of art. Watching her mother draw cartoon characters on brown paper bags, she was inspired at the age of five to become an artist. At the core of her mother’s artistic teachings was geometrics and cubism—things that helped form her career as an artist, educator and inventor.

Cleaster was a young teen during the Civil Rights Movement and found herself and her school, JHS 271, in the midst of the historic Ocean Hill-Brownsville Fight for Community Control that led to the 1968-69 citywide Teachers’ Strike of New York. That strike put more than a million students out of school for 36 days with hordes of police taking over the neighborhoods as racial tensions rose. Cleaster shared that she pushed through crowds to get to school where her teachers, who cared for the students, had crossed the picket lines.

Cleaster and four of her young friends formed a bond during that time that has lasted a lifetime. Due to their involvement in this tumultuous time of history, they now call themselves The Brooklyn 5 and are writing a book and developing a documentary to share their stories with the world. As an adolescent, Cleaster joined a team of New York-based educators and researchers and traveled with the team to Europe to study the open classroom education system, bringing back results for implementing this innovative method into the American school system.

Through her art, photography and speaking engagements, Cleaster says she is channeling her ancestors’ voices. Her current work, she said, often results in an “in your face creative expression,” and her use of materials “symbolizes tools that were used to enslave and humiliate my people.” Her work has been described as thought provoking and powerful and she uses her art to teach and empower youth.

The founder and lead instructor for Youth Artists Empowered, Cleaster said the program was created for youth living in Asheville’s Southside Community, a community adjacent the popular River Arts District of Asheville.

“I started Youth Artists Empowered (YAE) to serve the children around me who need a safe space to create art, “she said.

The program, including materials and supplies, is free to all children who sign up. The first four cycles of YAE were funded by the owners of Pink Dog Creative (a warehouse in the River Arts District featuring art studios, restaurants and shops). YAE classes are held in the Edington Education and Career Center on Livingston Street.

“We are losing youth in the streets and schools. Art serves as an umbrella under which I teach life skills and self-esteem and build these children up. For two hours a week, these children can come in and be children. They can use creativity and critical thinking to express themselves via art and that is invaluable,” Cleaster said.

Her long-term goal, as founder and lead facilitator, Cleaster said, is “to provide a place for the youth to create and sell their art, adding an economic empowerment component to take the program to the next level–to foster entrepreneurship.”

Focusing on the value of education for all students, Cleaster
invented the ALNUGE Codes (Alphabets, Numbers, Geometrics), an evidence-based curriculum known, she said is known as the modern day hieroglyphics. It is a geometric visual language that strengthens math skills and literacy that she has introduced into schools in the USA and internationally. There are 26 codes that represent the 26 letters of the alphabet and it is a coding system that she said allows any academic content to be taught, including art.

Cleaster said Columbia’s research team plans to introduce the ALNUGE abstract at the World Congress of Neurology Conference in Dubai.

While developing numerous art exhibits that allow her to begin important dialogues within the community, Cleaster finds time to reach out through programs such as Children First/Communities in Schools of Buncombe County (a nationally accredited affiliate organization of Communities in Schools) and the United Way. She serves on the Steering Committee of Southside Rising, a messaging and community engagement platform that amplifies efforts to cultivate healing, restore and reclaim community culture, support emerging leaders, grow food and incubate economic development in the historic African American Southside Asheville community in Western North Carolina.

Cleaster also served six years on the board of directors of LEAF Community Arts (a nonprofit connecting cultures and creating community through art), and will soon finish her term as a board member emeritus.