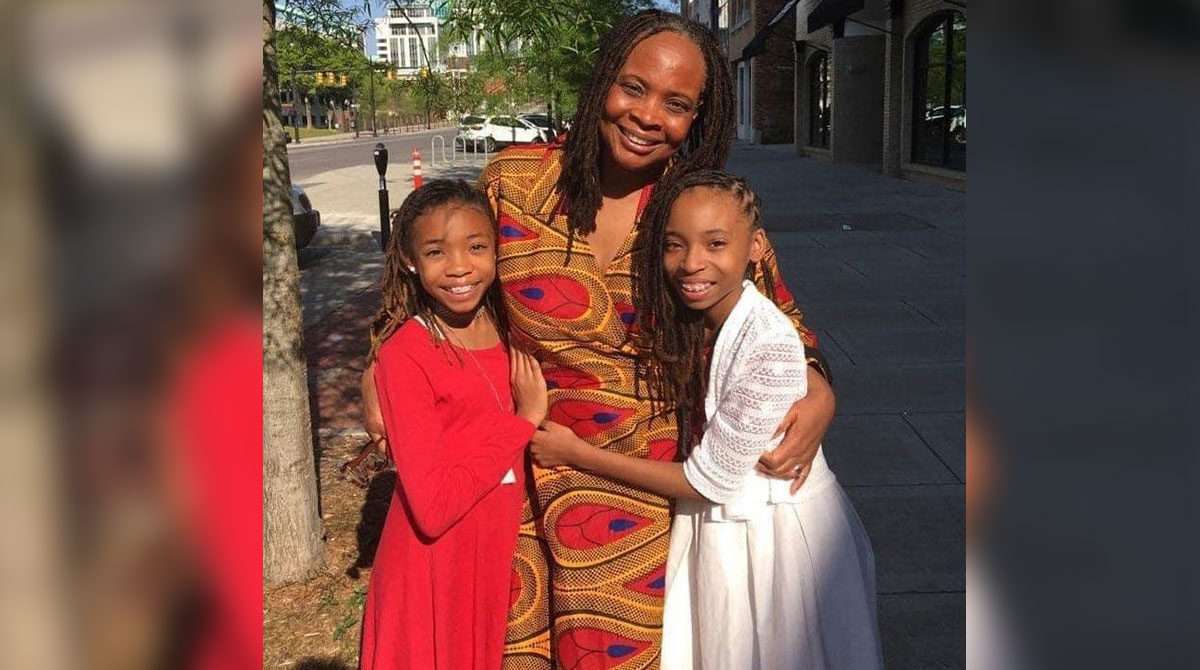 Adeyela Bennett and her 12-year-old twin daughters have shown that there are amazing possibilities when you reach out to serve the needs in your community no matter who you are or what the cause. Co-founders of Women in Training (WIT), a youth empowerment organization, Brooke and Breanna Bennett created their nonprofit in July 2019 to provide underserved youth with menstrual and other supplies they need to help put a stop to period poverty in their community.

The Bennett Family — Brooke, Breanna, Adeyela (who also has two older daughters) and her husband — currently lives in Montgomery, Alabama, but have lived in many places since Brooke and Breanna were born. Adeyela, who previously worked in communications for the American Red Cross (ARC) at its national headquarters in Washington D.C., later moved to the Red Cross Miami chapter to become a communications director, and there is where Brooke and Breanna were born. Adeyela said that her time with the Red Cross was deeply fundraising-based, which provided the foundation for her involvement in philanthropy. The Bennetts then moved to Dubai for five years, until the girls were 8 years old, where Adeyela was director of development for the American Academy for Girls. They eventually landed in Montgomery, where Adeyela is an instructional coach at a small private school.

The twins are now rising eighth graders at Saint James School in Montgomery and both stay very involved in extracurricular activities. They compete in cross country and are currently the fourth and fifth fastest in their school division. They also perform in plays through their school. Breanna, who also competes in tennis and dance, recently performed in the internationally-known Alabama Shakespeare Festival’s Christmas production.

IMPACT OF WOMEN IN TRAINING

Brooke, who first brought up the issue of period poverty to her sister, said the idea came from listening to her mother.

“My mom used to work at an all-girls school and she would tell me how her students would tell her they didn’t have pads,” Brooke said. She said the girls would get help from her mom or just had to make do with other, less efficient means such as using toilet paper.

Brooke said after hearing that from her mom and talking with Breanna, they decided they needed to do something to provide girls with the products they need.

“I’ve always wanted to do something to help people,” Breanna said. “I just didn’t know what. But after hearing about the need right here in our community, we knew it would be perfect to start Women in Training.”

Although WIT has only been operating for a year, there are many women involved in running the organization, with more than 15 just on the board of directors. Breanna said she believes they are brought together to support a cause like this because this is a way that women relate to each other, and they can all understand its importance.

“I think the people who help us run Women in Training were drawn to it because they recognized that they’re women, too. I think they imagined how they would feel if they didn’t have the supplies that they needed, and that helped them understand how important it is to help our cause,” Breanna said.

Every month, Women in Training creates WITKITS for the girls in need in their community. The kits include menstrual and hygiene products, but also more personal items such as journals and bracelets.

“We don’t want the girls receiving these kits to just feel like charity cases,” Breanna said. “We want them to feel special and wanted.”

“In every journal the girls write a special message, like ‘You are loved,’ or ‘You are beautiful,’ or ‘You are a Child of God.’ It’s really touching,” Adeyela said.

The girls said that their journey with Women in Training has taught them many important lessons they may not have learned elsewhere.

“I think my time with Women in Training has taught me to be kinder to others,” Brooke said. “If I hadn’t taken part in starting WIT, I may not feel as called now to do nice things. And, more than that, it gives me something to do during my days, which helps me to feel productive. It really feels like I’m making a difference.”

“Women in Training has definitely taught me to recognize that there are so many people, even right here in my community, who don’t have as much as I do,” Breanna said. “It’s taught me that no matter who you are or how much you have, you should always try to give to others. Without WIT, I wouldn’t be so aware of period poverty, and really poverty in general. My time with Women in Training has taught me to be a leader.”

Adeyela said, though she often talks about the menstrual hygiene aspects of Women in Training, it’s also a youth empowerment organization that strives to lift young people up in the community in other ways.

“I’ve always stressed the importance of taking on responsibility and making an impact to Brooke and Breanna,” Adeyela said. “The previous summer they produced a film called ‘Architects of Change,’ a 30-minute documentary about the Civil Rights Movement. Right now we’re trying to update it to include more information about the recent George Floyd protests. ‘Architects of Change’ was from 2018 when they were 11, but it turned out to be really phenomenal. They did some tremendous research with the scholars at the Rosa Parks Museum here in Montgomery and with some people who actually marched with Dr. Martin Luther King, Jr. And then with the film production, they worked closely with the Baltimore School for the Arts, so it ended up being a tremendous product and we’ve done several viewings. And they were just 11!”

Adeyela said WIT even helped to organize the Justice for George Floyd Protest Rally following the May 25, 2020 death of Floyd, a 46-year-old black man that died in Minneapolis during an arrest. They held the rally at the Alabama Department of Archives and History in Montgomery on June 6.

“We organized it only a few days before, and we invited some really great and passionate young people to speak. With only a few days of planning, 500 people came. Young people are our hope for the future. The world has so many problems right now. Always, the youth are the ones who have helped. Young people have always played a leading role in making societal changes, so I encourage them as much as I can.”

Adeyela continued to explain the way that supporting young people and treating them with kindness will result in great things.

“I’m really proud of them,” Adeyela said of her daughters. “When we returned to the states, they were 8 years old and we went to a school in Miami. The teacher there didn’t really appreciate them … Though she was experienced, she didn’t understand my children. She really caused us a lot of pain. It was heartbreaking. But, to see them now, just a few years later, producing a film, running a nonprofit organization, winning cross country track competitions, and acting on stage, they’re accomplishing so much. And they’re such kind human beings, they care so much about others, which is truly what’s important. But people need to realize how much damage someone can do to a child if they don’t have a support system there to help them. I’m so glad they had each other and their family through that situation in Miami. Now they’re getting a quality education, and the teachers appreciate them and what they bring to the table. That’s how it should be.”

Brooke and Breanna explained the importance of serving those in need and of appreciating others.

“I really think people should just be kinder,” Breanna said. “That would fix so much. So many people my age get bullied for being different. But when you’re different, you’re unique. You’re you. You need to judge people on how they act rather than how they look.”

“We need to be there for each other,” Brooke said. “If you find a need in your community, go for it. Those are people’s lives that you could be making better through your own service!”

Breanna added: “When Women in Training had our first giveaway, I was not expecting these girls in need to be happy and smiling. But they were so excited! The kits put smiles to their faces, which put a smile to my face. You never know; it could be the smallest thing you do to help and you could be a bright light in somebody’s life. Who knows what people can do once they’re helped? It’s so important to be kind and giving to the people you come across.”

For more information on Women in Training and the opportunities to volunteer and donate visit www.WomenInTraining.org