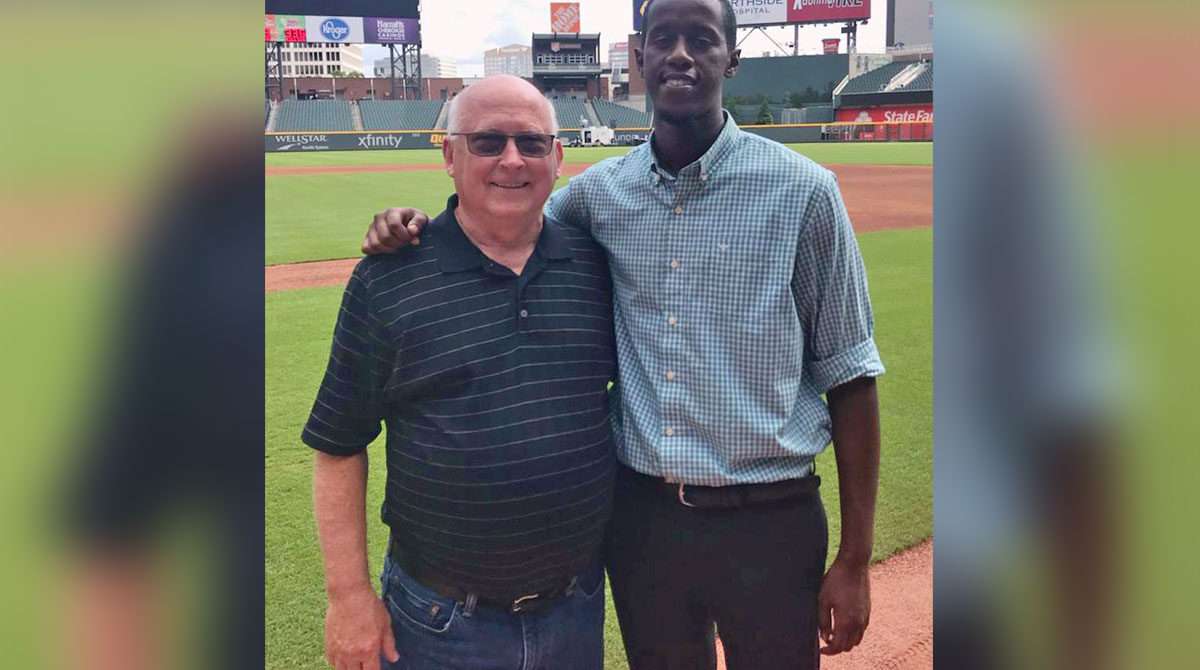 Bruce Clayton Is Passionate About Giving Youth A Hand Up

Born and raised in rural Western North Carolina in the small town of Sylva, the current Atlanta resident gives credit for his success to the influence of a great teacher during grammar school and a good friend whose parents helped him along the way.

“I think those of us who grew up without much and have been pretty successful in our endeavors in life give back because of what we didn’t have,” Clayton said. “I think you relate better to those in need if you were a person in need growing up. You have a chance to look back and say I want to help because along the way somebody gave you something. Maybe it was not something material but mentoring or whatever.”

A career filled with philanthropy

After earning a business degree with a concentration in accounting from Western Carolina University (WCU) in 1971, Clayton spent 25 years working for Sears in Chicago and Atlanta before taking an early retirement. He then pursued a second career in Human Resources with Genuine Parts Company, a Fortune 200 company headquartered in Atlanta. In 2014, he took a full retirement and since has found his life filled with philanthropic activities.

“I have been involved on many boards over the years, doing a lot of volunteer work,” Clayton said. “Through my position with the company, I served on different nonprofit boards of directors. Genuine Parts is a big supporter of the community and encourages its employees to serve. The company gave and continues to give back to the community.”

Since retiring, however, Clayton has found his plate remains full. “I am busier now than ever,” he said.

That is because he continues to offer his time to help those nonprofit organizations that he believes in with their fundraising and program growth.

One such organization is Year Up, a nationally founded nonprofit whose mission is to empower urban young adults by helping them develop skills, gain experience and have the support they need to reach their full potential in life.

“I started with Year Up when they came to Atlanta a decade ago. I serve on the board and as a mentor,” Clayton said.

Focused on young adults 18 to 24 who could not go to college perhaps for financial reasons, the program provides training for six months with mentoring followed by an internship.

“About 85 to 90 percent of these young people are finding jobs,” said Clayton who mentors a different individual in the program every six months.

Providing scholarships for youth in need of some financial assistance is also dear to Clayton’s heart. He has established the Bruce and Mary Clayton Family Endowed Scholarship for students pursuing a major in the College of Business at WCU, with preference given to a resident of his native Jackson County or a homeless or foster student.

Additionally, Clayton’s high school graduating class of 1964 pitched in to create a $27,000 endowed scholarship to benefit a WCU student from Jackson County.

In memory of his late wife, he has established the Mary and Bruce Clayton Family Scholarship at Kennesaw State University where one grandson graduated with a music degree and another is a sophomore music major.

Clayton has excelled at raising funds for important causes. He helped raise more than $4 million for a building needed on the campus of Mill Springs Academy where he recently accepted the temporary position of acting headmaster after the sudden death of the school’s leader.

Becoming associated with the alternative school when his grandson needed additional help learning, Clayton chairs its board of trustees and stepped in to help the Alpharetta, Ga., based academy when duty called.

“I never dreamed I’d be acting headmaster,” Clayton said. However, his heart has been with the school since he learned it serves children in grades 1-12 who need a different environment in which to learn.

“It is a great school, a very special school that serves students with learning differences where they cannot survive in the public school setting,” he said. Those differences include things such as dyslexia or attention deficit (LD and ADHD). The school provides very small classrooms and alternative ways of teaching children so they can be successful.

“It breaks your heart to see these kids struggle so hard,” Clayton said.

Giving back through service

Among his numerous volunteer activities, Clayton serves as Chairman of the Board of Directors of the Cobb Community Foundation in Cobb County, Ga., working to get individuals to set up donor advised funds for charitable causes.

“I have a donor advised fund but have not designated anything yet. I want to let my kids decide that. I think it is important for them to learn to give back,” he said.

Clayton said he feels American society today is suffering from a lack of individuals who are passing on the importance of philanthropy to their children.

“Many self-made individuals are eager to give their children what they didn’t have growing up. But in some ways it is bad because those children don’t have the feeling to give back,” he said.

Another nonprofit Clayton is passionate about is the Center for Family Resources, which helps to empower and stabilize families to become self-sufficient. He has served as board chair for the Center but is now on the Advisory Board.

“The Center gives people a hand up versus a hand out,” he said. “The goal is to get them back into society by offering training and housing at a minimal cost.”

Clayton currently serves on the WCU Foundation board and formerly served on a board that supports adoption and foster care and a Junior Achievement board.

“I like to deal with nonprofits that are kid or young adult oriented,” Clayton said. “It is kind of my passion to make sure kids get off to a good start.”