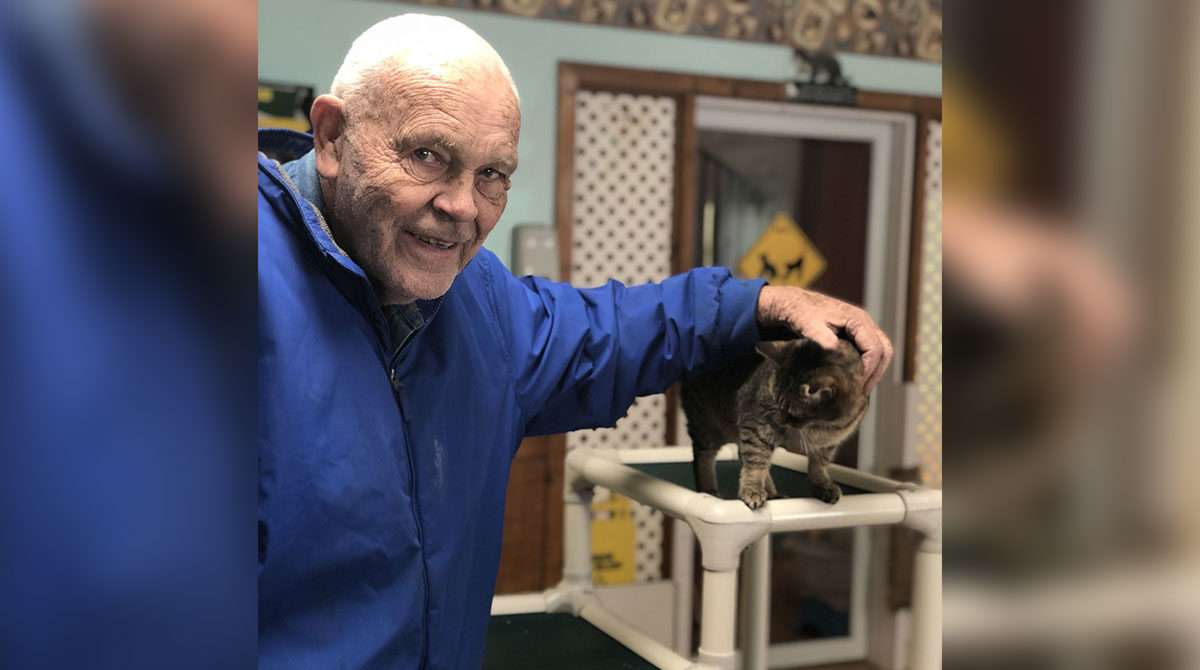 A retirement plan by Harold Sims, D.Ed., to open an antiques mall turned into a full-time effort to save cats from being euthanized in local animal shelters. Ironically, instead of selling the antiques in a shop, as he had originally anticipated, he founded a private no-kill animal shelter and opened one of the few museums in the world honoring the house cat. He filled the museum with memorabilia, collectibles and even an ancient Egyptian cat mummy while also using it to educate the public about the value of his furry feline friends.

Proceeds from museum sales and entry fees, along with donations and grants, help to maintain the no-kill shelter that has coordinated the adoption of more than 5,000 domesticated felines.

A LIFE OF HAPPENSTANCE

Although he did not grow up with money, Harold Sims has dedicated his retirement time, energy and finances — which included a small inheritance from an aunt — to saving cats from certain death in kill shelters.

An upstate New Yorker by birth, Harold was known by friends as “Hap.” He took a job at age 14, working part-time after school and summers at a dairy farm milking cows, cleaning the barn and loading hay for $3 a day. He bought fishing gear and traps with that money for catching muskrats and mink and selling their pelts to Sears and Roebuck for up to $10 a pelt, something he now regrets doing.

Harold said because he stuttered, he was considered “dumb” in school but he was always involved with the 4-H Club. A friend wrote in his yearbook that he would most likely end up as a fur trapper. Although he finished high school in 1953 near the bottom of his class, he decided to enroll in a teacher’s college even though he did not aspire to be a teacher. Working three jobs gave him little time to study. By 1954, he dropped out and joined the U.S. Navy for three years with hopes to return to college later using the GI Bill for tuition and expenses.

Ironically, the man who had no intention of becoming a teacher did just that. Over the years, he earned a doctor of education and was actively involved with nonprofit organizations that included the National Audubon Society and the Sierra Club. His 30-year career included a move to Florida where he worked for the State of Florida Department of Natural Resources, the Hillsboro County Board of Health and St. Petersburg Junior College where he taught biology and ecology for 22 years.

When he and his wife, Kay, retired in 1991, they still had family to care for in Clearwater before they could move to Western North Carolina where they had purchased a home. All the while, Harold added to an antique collection he thought he would sell in an antique store once he retired to his new home.

Harold said he had been happy to get out of the classroom after so many years of teaching but then found he had a yearning to continue educating in other ways. After moving to Jackson County, North Carolina, Harold learned the Cashiers area was trying to open an animal shelter and he began to volunteer and donate some of his collectibles to help out. He was saddened, however, to learn it would be a kill shelter and decided he would open a no-kill shelter on his own in a small tool shed. That was 1996 and it was the only no-kill shelter in the area.

Harold’s efforts to save cats earned him the name of “Catman” around the area, so he decided to get a specialized tag for his vehicle. North Carolina required a license plate to have a combination of numbers and letters, so he decided on the name Catman 2.

Harold said he didn’t like the sound of Catman1 but did like that Catman2 sounded like Catmando, a cat known historically as a joint leader of a British political party (or singer Cat Stevens’ song “Katmandu” about the capital city of Nepal). So, Catman2 became the name of his Cullowhee shelter where thousands of cats and kittens have found a loving environment until adoption.

“We’ve made the Jackson County shelter a no-kill shelter now by taking out all the cats. We pay for them and find a place for them,” Harold said. “No cats have been put down in that kill shelter for the last three years.”

Harold said his shelter does not give away cats. “There are no free cats ever. You have to be able to afford a cat and we follow up. Every cat we care for is a very important cat,” he said. “It is a very unique shelter and we have a return policy.”

The shelter also operates a low-to-no-cost spay and neuter program for low income families and a trap-neuter-release program to help reduce the feral cat population.

Through the years, Harold has worked tirelessly. As the shelter program grew, he and a friend, who is a general contractor, “physically” built a new 4,000-square-foot shelter and later built a museum called The American Museum of the House Cat, one of the only domestic cat museums in the world, which has seen more than 18,000 visitors since opening. The nonprofit museum, currently located off Highway 441 South in Dillsboro, North Carolina, has 15 showcases filled with Harold’s 35-year collection of relics and collectibles and everything cat related from modern knick-knacks to ancient Egyptian art.

Harold paid for the buildings. To sustain operations, the shelter has one employee who also maintains the website and social media and lives on the grounds in a nearby cabin. The museum also has one employee, with Harold working around the clock to raise money for the nonprofit and serving as a guide at the museum.

A host of volunteers help keep the shelter running, including students from nearby Western Carolina University who often come by to spend time with the animals. The shelter has since expanded to include some rescued wildlife that are cared for and then released. The shelter is a cage-free home allowing the cats to roam freely in rooms with fenced patios. Each room houses 15 cats. There is a separate space for kittens until they are old enough to mingle freely. There are also education opportunities with tours for school children. Harold has also written five books about cats and a “Stephen King-type” fictional story about a man called “Catman1.”

Harold said he sees what he has done with his retirement as a reminder to others that retirement does not have to mean the end of life.

“It can be your opportunity to do something that you enjoy that you think will make the world a better place than you found it. Everybody should give back,” he said. “Some people think I’m crazy, but we are doing a wonderful thing for this area. I don’t think people appreciate that I’m saving cats’ lives. Cats live a long time and they do matter.”

Harold said he needs help to ensure the shelter can continue after he is no longer able to help. He needs cat enthusiasts to pitch in, make donations and help find grants to ensure sustainability.

As he nears his 85th birthday, he knows that continuing the grueling schedule he keeps with the shelter and the museum cannot continue forever.

“Right now, I’m tired,” Harold said. “I need someone to take over. I don’t want it all to go down the tubes. It’s the best little cat house in Western North Carolina!”

To learn more about Catman2 and The American Museum of the House Cat visit Catman2.