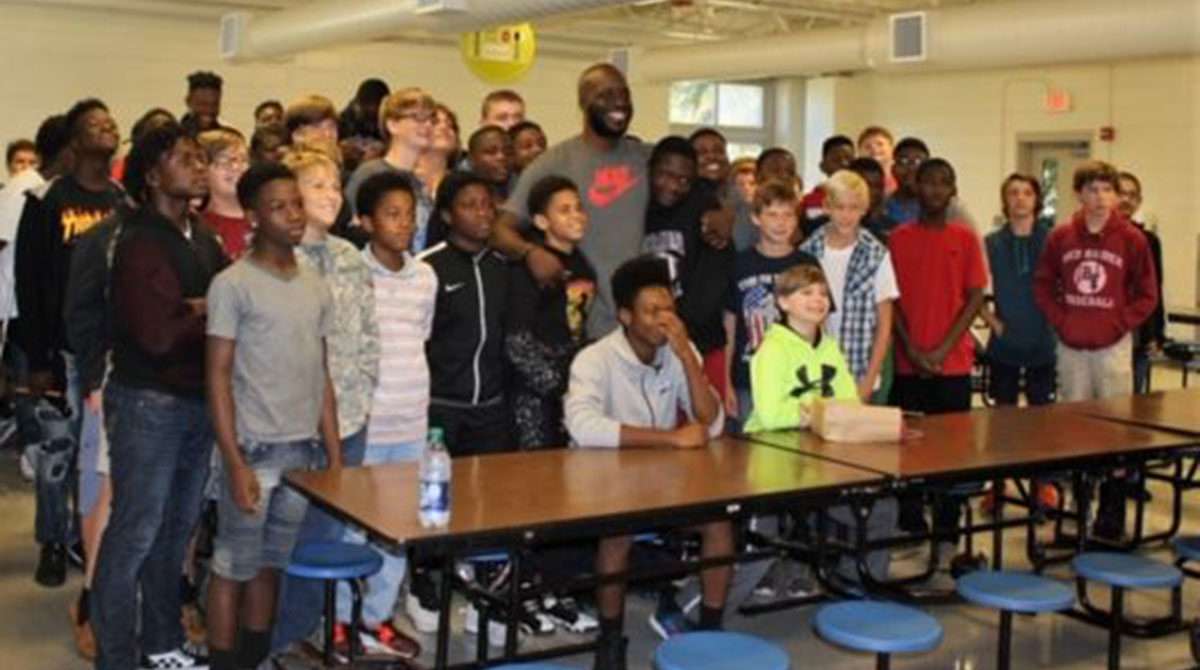 Former Clemson and National Football League (NFL) star Ricky Sapp spends his energy these days mentoring, speaking to, teaching and inspiring youth. The Bamberg, S.C., native knows from experience what a little encouragement during your teen years can mean.

“I had a good childhood but was troubled in school. I had an uncle I looked up to and started playing sports in high school. I turned things around and football took over,” he said.

Sapp said he had some great people in his corner.

“I was blessed with so many teachers, coaches and close family members who wouldn’t give up on me,” he said.

The result of that support—Sapp earned a full football scholarship to attend Clemson University where he earned a bachelor’s degree in sociology and played college football as a linebacker. The 6-foot-4-inch athlete then was chosen to play for the Philadelphia Eagles in the fifth round of the 2010 NFL Draft. He went on to play linebacker for the New York Jets and the Houston Texans ending his last football season in 2014.

“I talk to them about how they have the power and authority to change this world. I tell them basically three things: One, be fearless; two, be leaders; and three, dream big.”

When first drafted to the NFL, Sapp said he started The Ricky Sapp Foundation: Dream Big Live Big, to help kids. Each year since then, he has held a football camp at his former high school in Bamberg and in 2018 held a camp in Myrtle Beach for about 250 youth. There is no charge for any of the youth to attend.

“I get NFL players to come back and help with the camp,” Sapp said. “We get sponsors to help cover the cost and we give out Dream Big gear. We do drills and hold competitions so the kids can win awards. At the end, I give a speech to talk to them about working together and about what they are doing and who they are hanging out with.”

On the foundation website (linked above), Sapp is quoted as saying: “When you are blessed with a gift from God, you must have passion and take full action to make a difference in the lives of kids. Every kid in every school, every home, every team … matters.”

With support from the Foundation, Sapp has been able to touch many young lives, helping empower them to be the best they can be.

“I have always been a person who gives back,” he said. “A couple of years ago, I determined that my purpose in life is to work with kids and mentor kids. They need role models. Unfortunately, right now, they are going through so many things like school shootings, bullying and some even have no parents at home. Every time I can, I get in front of them. I am passionate about kids.”

While the Dream Big Live Big Foundation has continued to grow since its inception in 2010, Sapp said he pictures it getting bigger and better so he can help more kids. “I plan to travel the world and speak to youth,” he said.

This year the fifth annual football camp will begin on June 19 at Bamberg High School with support from veteran players like Da’Quan Bowers and Super Bowl Champion Byron Maxwell. For the first time, female youth will be able to attend a Cheer Camp led by 2018 Pro Bowl Cheerleader Amanda Ross.

REACHING INTO THE COMMUNITY

In addition to helping youth through support of the football camp and speaking engagements, Sapp said the Foundation provides an avenue to reach out to families in need within the community. Other efforts include providing books and supplies as well as scholarships. In addition, during Thanksgiving and Christmas, families that need some extra support whether it is just receiving a free turkey or getting assistance with some Christmas gifts are identified and helped.

For Sapp, service is not something to do to keep busy or to gain recognition—it is his passion. He encourages youth to make positive changes within themselves, within their schools and within their communities. His belief is that a single action can make a difference, while a collective action can impact the world.

His single goal, he says, is to do his part to make the world a better place for everyone, one child at a time.

“I think we were all put here to serve,” Sapp said. “I really believe that. We have to come together and put our focus on the kids. We have to put our energy on the kids. And if so, we will see huge things happen that we have never seen before.”