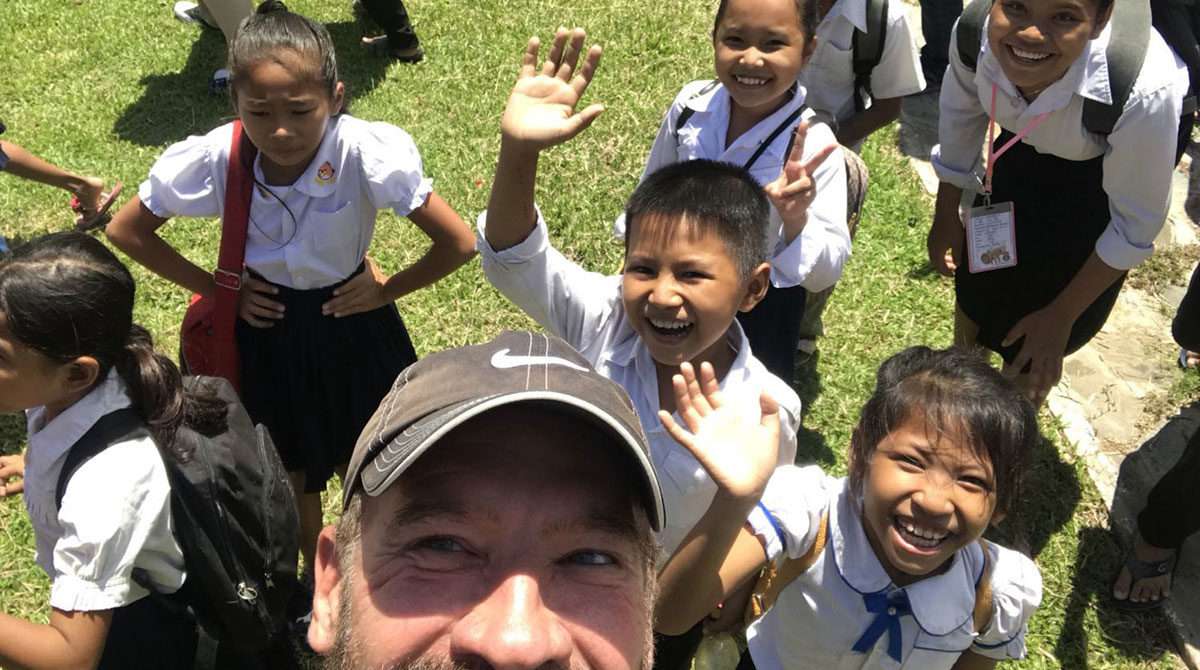 Craig “Sawman” Sawyer has led an interesting life that placed him in situations that would put the fear of God in most people. He served his country in the U.S. Marine Corps before joining the U.S. Navy and its SEAL Team Six, an elite force of highly trained military personnel with specialized warfare capabilities on the sea, air and land established in 1962 by President John F. Kennedy to conduct counter guerilla warfare and clandestine operations.

After serving his country in the military, however, Craig found a new way to combat evil by creating a nonprofit that coordinates sting operations to save abducted children and put pedophiles behind bars.

With growing knowledge of child sex trafficking within the United States, he coordinated a team of highly skilled “warriors” whose mission is to raise awareness of what Craig and others deem an “epidemic” in America and around the world. By creating Veterans for Child Rescue or V4CR, headquartered in Tucson, Arizona, Craig and his team are able to work closely with local and federal law enforcement agencies to track down child predators and help bring them to justice while saving the lives of the nation’s most vulnerable — its children.

Craig grew up near Houston, Texas, with an older sister and brother. His father was pastor of a church who moved his family into the country when Craig was about 5.

“I come from humble beginnings,” he said. Where and how he was raised, he said, shaped his life in many ways.

“I saw Dad really helping others. I witnessed it daily and thought that was normal. Once I went into the Marines, however, I saw that most people live for themselves.”

Craig said his parents were so admired, he couldn’t take them anywhere later in life without people hugging them and thanking them for what they had done to help their families.

“Dad had gone into prisons for 30 years and traveled the world on missions. I had him on a pedestal. I knew I could never achieve that, but I wanted to be more like him,” Craig said.

His early life in Texas was filled with “rough and tumble” boys who he said needed Bible stories like that of King David.

“King David was a great warrior and that called to me to go forward and stomp out evil,” Craig said.

In 1982, at the age of 19, Craig joined the U.S. Marine Corps where he gained tactical experience. In 1986, he joined the U.S. Navy and became part of the U.S. Naval Special Warfare Development Group known as DEVGRU. Being a physically strong person helped him achieve his goals in the military, but the will, he said, came from inside him.

“Your body has to be prepared to survive it, but your determination and personal insane level of commitment is how you get through it,” he said.

As a member of a Tier-1 level unit at SEAL Team Six, Craig was running high level operations and was a DEVGRU sniper. He gained combat experience helping those who could not help themselves.

“We shouldered accountability and responsibility of high level threats in war torn countries,” he said.

Serving his country at such high risk, he said, was not for the money. “We gained inner satisfaction knowing we had saved the day.”

Craig had been in the Navy SEAL Teams for 13 years and was at SEAL Team Six until 1999 when his wife got pregnant with their first child and he had to reassess his lifestyle. He left the team and spent five years with a federal law enforcement agency as a criminal investigator and federal air marshal and 10 years with the Department of State and other intelligence agencies.

Along the way, he connected with many individuals, including a friend in the CIA, who exposed him to the true level of abuse of child trafficking.

“I learned about the dark, horrid abuses of child sex trafficking in the United States,” Craig said. “It is the fastest growing criminal enterprise on earth!”

V4CR, developed by Craig in April 2017, is a nationwide volunteer organization that focuses on exposing the darkness of the very financially lucrative criminal enterprise of human trafficking and its estimated $38 billion dollar child sex trafficking sector.

The reality of how humans are abducted in America hit home to Craig in late 2016 when his own daughter was abducted and assaulted.

“She escaped and called on the phone screaming,” he said. That incident further ingrained in him a dedication to do something about a global problem that sees children as young as infants sold, sexually abused, tortured and often murdered or who later commit suicide to escape their captors and the inhumane treatment they receive. Craig said statistics show that some 30,000 victims of sex trafficking die each year from abuse, disease, torture and neglect.

A part of V4CR is the VIPR unit (Veterans Interdicting Pedophile Rings). VIPR consists of former special operations veterans from every branch of the military, Craig said, including the Army’s noted Special Forces unit, Delta Force.

“The ugly things we see break my heart,” Craig said, noting that his team is genuinely dedicated, just as he is, to rescuing victims and putting predators in jail. The team goes to areas where a spike in child prostitution has been noted by local law enforcement. They conduct sting operations and once predators incriminate themselves, law enforcement makes the arrests.

V4CR works closely with military professionals, former and current law enforcement, civilians, other nonprofits and “those who are willing to do whatever it takes to end child trafficking in America,” Craig said.

Since the organization operates as a nonprofit and as a means to better educate the public and to raise necessary funds, V4CR developed a 90-minute documentary called “Contraland” based on the organization’s operations with child sex trafficking in the U.S.

“The children are contraband and America has become contra land,” Craig said, revealing the origin of the documentary title.

The documentary offers chilling facts about Mexican cartels and gangs that abduct children and bring them across the U.S. border where there is no wall or obstruction to hinder their movements.

It delves into many factors, including cult groups that have allowed this criminal activity to thrive and grow in America.

“Some predators rape hundreds of children and destroy their little minds,” Craig said.

Craig would like to see every person watch “Contraland” and learn more about child trafficking, how to identify it and how to help stop it.

“My thing is, let’s create a hostile environment in the U.S., a non-permissive environment so we can demand stronger legislation. Let’s be alert and drive this evil from our nation,” he said.

He added that there needs to be a “radical increase in enforcement of our laws.”

Through V4CR, Craig and his team hope to expose the threat, attack and eradicate it. While he said V4CR is not a Christian organization, all its team members are Christians.

“It is a lot of good people putting in great efforts,” he said. The organization has a key staff that is paid, but it has a board of directors and uses a lot of volunteer effort to achieve its goals.

Craig spent the first part of his career fighting terrorists and is now spending his time fighting a different type of terrorist – those individuals who harm and dehumanize the most innocent and helpless in society; those who destroy the lives of children.

He will continue to fight because, he said, “What kind of warrior can’t look after a child?”

To learn more about V4CR or to volunteer your time or resources please visit Vets4ChildRescue.org or call (520) 210-7499. On the website you’ll be able to watch the informative “Contraland.”