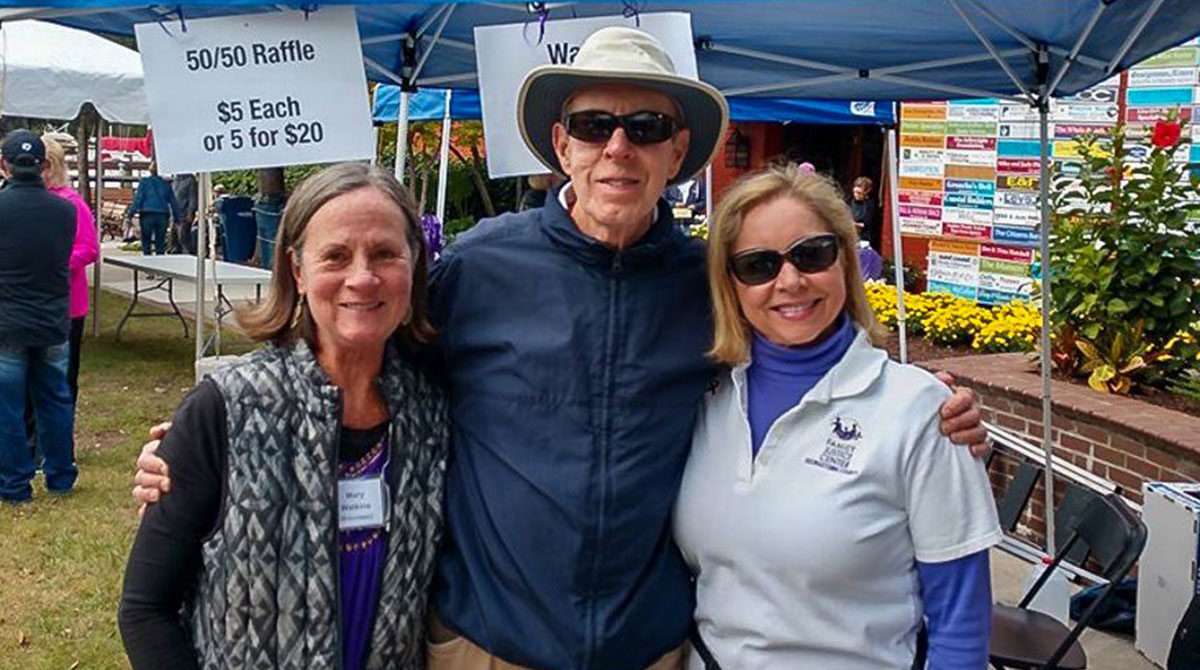 Volunteering and giving back to his community was not an initial part of Dick Clute’s life. It took an early retirement to give him the opportunity to join the ranks of philanthropists who care about sharing their time, money and sweat to make the world a better place to live. At age 55, and a couple of years into retirement, Dick said he was frustrated at trying to figure out his purpose in life when God gave him a message in “loud and clear terms” that he was to help unite the community while also saving lives.

GROWING UP IN NEW YORK

Dick grew up north of New York City, part of a middle-class family. His dad was a teacher and his mom—typical of that time period—stayed home to take care of her two sons and the family home.

“It was in the ‘40s and we lived on a hill where, at that time, we could see the Empire State Building,” he said.

Dick admits he struggled in school. Although he had never left New York State, he decided college in another state would be a good choice for him.

“It was worth the move to a different part of the country,” he said. He took business management at the University of Denver and eventually earned a graduate degree in labor and industrial relations from Michigan State University all while the Vietnam War was heating up.

He went to work for Eastman Kodak Company just prior to getting drafted and met Helen, who would become his wife.

“It was a difficult decision,” Dick said of getting married knowing he could go to war. After almost 52 years of marriage and raising two children, however, Dick said it was well worth it.

After completing his military service, Dick returned to his job there where he remained for 30 years. He spent his last years working in Human Resources primarily responsible for downsizing thousands of employees, he said.

With a job that kept him busy more than 60 hours a week, Dick said he had no time between work and taking care of his family to even think about volunteering. However, when he was able to retire in 1998, his newly found freedom from long work hours allowed him time to reach out to the community. His first exposure to community service was with the Rochester, New York, United Way.

“I helped them figure out a volunteer database,” Dick said. “I was there about two years and during that time I was hearing a lot about Gen. Colin Powell’s ‘America’s Promise Alliance.’”

The program was a driving force behind a nationwide movement to improve the lives of America’s youth. It brought together national nonprofits, businesses, community and civic leaders and others to initiate goals designed to help youth.

Dick said he joined a program called Service Over Self and, at one point, traveled to Orlando, Florida, where he met someone from Georgetown, South Carolina.

“She didn’t realize I had already purchased property in Pawleys Island in 1997,” Dick said, adding that his intention was to move to the area and perfect his golf game.

Dick and his wife moved south in 2000. After moving he said he realized his game could not be perfected, so he decided he needed something more stimulating to do with his life.

That is when he asked the Lord for help, he said.

“I was not very religious but I asked what the Lord wanted me to do, and He spoke to me,” Dick said.

Dick said he spent time meeting people who showed up in his path; individuals who were community activists. Some of those people were Carol and Garvey Winans. He was invited to attend a meeting to establish a community activity center for the rural county that was partially economically depressed. Dick said the plan sounded more like a YMCA, so he encouraged them to explore that route.

With Dick’s help, some $6 million was raised, he said. With his initial capacity as a fundraiser, Dick stayed involved over the next six years until project completion. Dick also pushed for a green building, which cost a little more but was something he felt was important to the environment and to utilize resources more efficiently.

“That honored my commitment to unite the community. With the help of a team of people, it took about six years of my involvement serving on the board in various capacities. One reason it was successful,” Dick said, “was because there were four or five children every year dying in the rivers. We found that unacceptable and wanted to save lives.”

Through a joint venture of the new YMCA and the county school system, and with grants from the Frances P. Bunnelle Foundation, every second grade student in the county, was and continues to be, provided water safety and swim instruction.

With the YMCA project completed, Dick needed another way to serve. Because he knew the Winans, he was asked to consider serving on an advisory board of a Safe Families Initiative.

“The reason it was formed,” Dick said, “was because we were losing about four women a year due to homicide. South Carolina at that time was ranked No. 1 in the country for women killed by men as a result of domestic violence.”

Dick said he found that to be an unacceptable statistic and became involved in fundraising again. He suggested and helped to start a fundraising event called the Taste of Georgetown. For the next 10 years he helped to implement the event, bringing people to a somewhat depressed community that has since become a bustling town, he said. Thus, the Family Justice Center in Georgetown was born. For the last six years before Dick retired and moved to Florida, he served as co-chair and then board chair of the Center.

The Family Justice Center grew in leaps and bounds and has since expanded into adjacent Horry County, South Carolina. It was renamed the Winans Family Justice Center of Georgetown and Horry Counties. Dick said it has made a significant difference. While South Carolina remains in the top 10 states for homicide, domestic violence reports in September 2019 showed an increase in men murdering women dropping the state from sixth in the nation to fifth.

“It remains a problem, especially in Horry County where there is such a transient population,” Dick said.

Dick’s volunteerism has never stopped there. He has been a financial donor while fulfilling his commitment to God to both unite his community and save lives. He said he typically gave about 30 hours a week to his chosen nonprofit agencies. He and Helen also commit about 30 percent of their income annually to different organizations.

“I believe that whatever organization you support, it needs to be mission driven. That was true of the Georgetown YMCA and the Family Justice Center. When I consider supporting an organization, I look at how effective it is,” he said.

With so many good causes available to choose from, Dick advises selecting a cause you can be passionate about and one with a “working board.”

“The important thing in any community service entity is the board and getting the board to work toward common goals. There are so many needs in the world,” he said. “Determine your passion and actually get involved. It will be fulfilling and helps with mental stimulation. You can use your gifts and resources that you have developed.”

Dick said using one’s skills as part of a team dedicated to a common cause can help to reach lofty goals.

Now that he and Helen have moved to Florida to be closer to family, he knows he will soon look for another cause to support.

“I have a passion for the military and families who need help,” Dick said, adding that he is waiting on the Lord to send him a message.

“It will come!” he said with confidence.