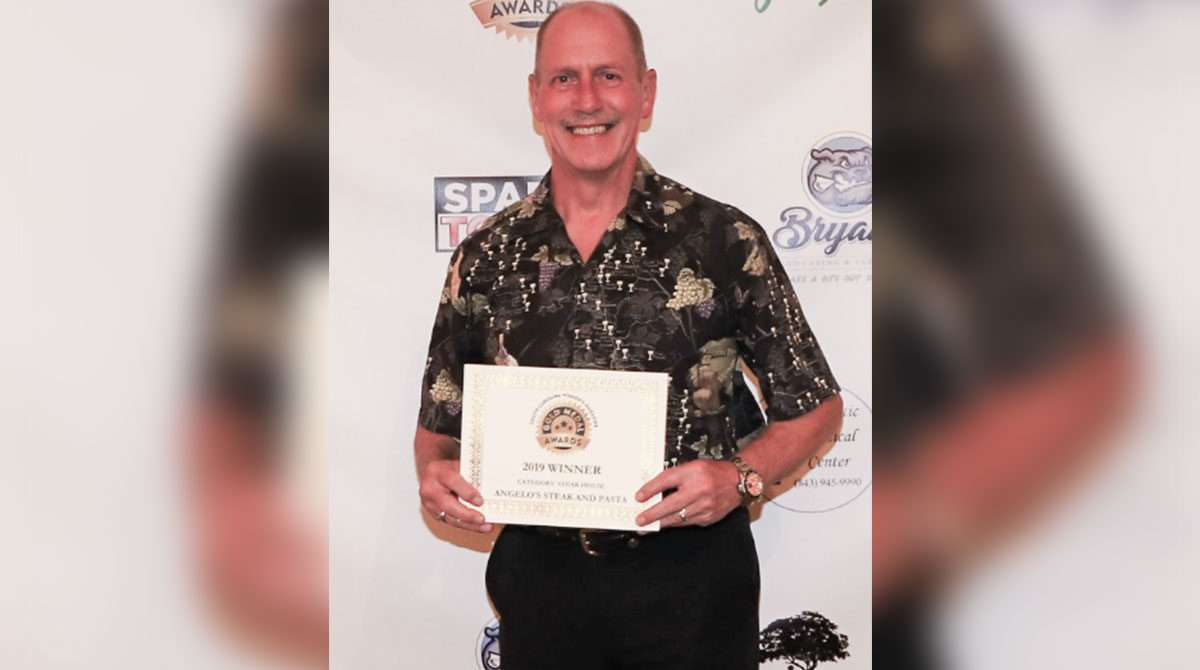 Humanitarian Support Is Dear To The Heart Of Angelo Antonucci

Angelo Antonucci earned a bachelor’s degree in biology with intentions of becoming a medical doctor. With the thought of six more years of education after undergraduate school, he refocused his “people person” personality towards building a highly successful career in the restaurant business.

Today, 40 years after opening his own restaurant, Angelo, with the help of his wife Angela, continues to operate Angelo’s Steak & Pasta in Myrtle Beach, South Carolina. While the business has received numerous accolades for its quality food, Angelo may be best known for his community support and generosity.

Growing up in Steubenville, Ohio, Angelo said he felt a calling to become a doctor.

“I always found myself to be a people person. In grade school, I was always the one to hang out with the kids that were not as popular. That was my nature,” he said.

Angelo thought his natural ability to relate well with others might suit him well in a medical career. Blood and things that people naturally shy away from did not seem to bother him as a young man, he said.

“When our dog got attacked by a raccoon, my cousin and I stitched him up with fishing line,” he said. The dog had a successful recovery.

It was not the thought of dealing with blood or sick people that turned him away from medicine, he said, it was the thought of spending so much more time in school. While he did not want to strive for the medical degree, he was more than willing to work hard.

Angelo says he learned his work ethic from his dad, Angelo, who was a “sports freak.” His mom, Frances, on the other hand was overprotective because her oldest son died in her arms at age 4. So when Angelo, a scrawny youth, joined the football team along with his cousin, his mom was concerned. When the cousin quit the team, Angelo did, too, until his dad reminded him that making a commitment counts.

“He looked me square in the eyes and said ‘the Antonuccis never quit.’ The next year, I was the quarterback. I got that work ethic in me and I never quit. It was a valuable life lesson,” he said.

FINDING HIS NICHE IN THE SOUTH

With a decision not to continue to medical school, Angelo found himself without a job after graduation from college in Michigan. Returning home, he started working in his dad’s small business where they made two products—meatballs and homemade Italian sausage. Apparently, a natural born businessperson, Angelo got the work his dad did in 40 hours completed in 20 and spent the rest of his time playing golf. Within a couple of years, however, his dad passed away from colon cancer and Angelo found himself in the position of working with a much older business partner.

By 1979, Angelo made a summer trip to Myrtle Beach in August and noticed the booming restaurant business there. Enticed by warmer weather and long restaurant lines, he made a decision to move south.

“Young men, they think they know everything. Never having a clue Myrtle Beach could be seasonal I flew back in November and signed a lease and moved here the week of New Year’s Eve. It was the craziest move I ever made,” he said.

Along for the crazy ride was his best friend, Steve Straka, who helped run the business until his sudden death in 2009. Angelo said he took the front of the house and Steve took the back and the two young entrepreneurs opened Angelo’s Sandwiches & Deli.

“An Italian deli in Myrtle Beach 40 years ago was not a good idea,” Angelo said. “A customer wanted a side of grits with his sausage sandwich.”

A wiser and older pizza restaurant owner located next door to the deli sat the two down and offered some well received advice.

“He said we might have a concept problem. He gave us an idea of starting an all-you-can-eat spaghetti dinner for $2.99,” Angelo said.

Painting “restaurant” over the deli sign and switching from carry out to sit down worked so well the first night, the food and clean dishes ran out and they had to close the doors by 8 p.m.

Previously, Angelo had visited a family friend in Toledo who owned Dominic’s, a restaurant with an Italian buffet. Angelo felt a buffet would work well in Myrtle Beach. However, his location was not large enough with only 60 seats. In 1987, he found a second location and opened the buffet. In 1989, Hurricane Hugo damaged the first location so the owner bulldozed it. Angelo then added 2,500 square feet to the new building so it would seat 240. His booming business remained there for 28 years.

On October 4, 2012, Angelo and Angela moved the restaurant to its current location at 2311 S. Kings Highway that can seat 420 people, still serving what had become the most popular Italian buffet in the area. Additionally, the restaurant boasts “The Greatest Steaks in the Universe.” Angelo and the restaurant have received numerous accolades over the years including the “Restaurateur of the Year” presented by the South Carolina Restaurant and Lodging Association.

GIVING BACK AS MUCH AS HE GETS

Angelo’s Steak & Pasta gained notoriety in the Myrtle Beach community not only for its great food but also because of its owner who developed a reputation as an avid community supporter, humanitarian and philanthropist.

Even when struggling to pay $50 a week to keep the lights on, Angelo had a heart for helping those in need.

“I was raised as a Christian and I understand it is better to give than receive,” he said. “You cannot out give God.”

Angelo said he learned to be a cheerful giver and he has always enjoyed doing it, whether it was donating financially to a good cause or providing a meal for a fundraising event.

“If someone needs food for a church or athletic organization like the Fellowship of Christian Athletes, most of the time I can help. I’ve always just enjoyed helping people less fortunate,” he said.

With full support of his wife, Angelo has given generously for hundreds of causes with a special place in his heart for the men and women who wear uniforms, whether it is police, fire, EMS or military. All receive discounts when they come in to dine. Numerous organizations have also benefitted from generous spaghetti dinner fundraisers.

For a decade, he has supported a youth fundraising spaghetti dinner for Surfside Beach’s Church of the Resurrection. He also provided an annual dinner for more than 10 years for The Red Cross Rescue Racers, a marathon training team that raised thousands of dollars to support American Red Cross disaster response efforts. Additionally, he provides a financial donation annually for the Red Cross’s Heroes Campaign.

A member of the Surfside Beach Rotary Club and Rotary International’s Paul Harris Fellow recipient, he has supported a spaghetti dinner fundraiser for that organization for more than 15 years. He supports the Myrtle Beach Citizens Police Academy who assists when hurricanes strike the area. He has provided monetary support to the Quilts of Valor Foundation and the Special Operations Wounded Warriors Charity, the Beach Ball Classic Tournaments, The Grand Strand Miracle Leagues that support disabled children, and pledged financial support to the new International Culinary Institute of Myrtle Beach located at Horry-Georgetown Technical College.

With four grown children and a first grandchild and with more than 100 employees, the Antonucci’s continue to strive to do as much as they can for their community while keeping their business operational.

“We don’t do it to be thanked. We just try to be a blessing to others,” Angelo said. “For me, whenever I extend myself further out, I get blessed in many other ways—in relationships that have helped grow our business.”

Nevertheless, he admits it is nice when someone comes into the restaurant because he or she has heard of some outreach activity he and Angela have supported and says, “I just want to thank you for what you do!”