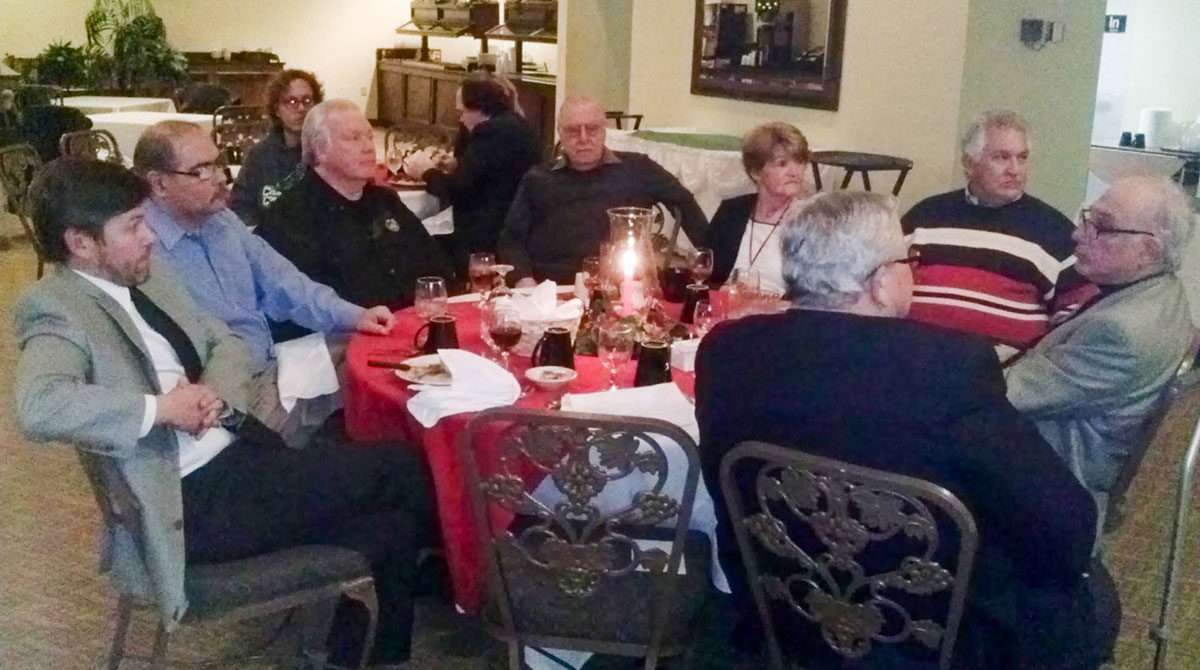 John E. Bonsignor was born March 25, 1931 in Brooklyn, New York, and he grew up in a family with four brothers. While waiting on an entry letter for college, he was drafted to enter the military that was getting involved in the Korean War not long after World War II ended.

“I thought, I’ve got to serve my country so I joined the U.S. Air Force on July 4, 1950,” he recalled. A teen that had never been outside of New York State, John found himself in Texas, then Panama City, Florida, before being deployed—ironically—back to his home state where he was assigned to an early warning facility at Montauk Point.

After a year, however, he was sent to California, then to the Philippines where he worked as an information officer. It was there that John found his niche in the communications world by working at a radio station on weekends.

When he returned home at age 22, testing by Veterans Affairs proved John had strengths in the communications field and was a “visionary individual.” He entered the Cambridge School of Radio and TV Broadcasting in New York City to study and pursue a career in the field. As an on-air personality on radio and also cable TV, John had the opportunity to reach out to listeners and offer ways to help.

“I am a great believer in helping and lifting up the down trodden,” John said.

Along the way, John met another Air Force veteran, Betty Sue Rosemon, in New York and asked her to the opera, which she found so boring she fell asleep. That didn’t deter him, although he was and remains a lover of the opera. The couple married in 1958 and later bought a part-time home in South Carolina with John retiring and moving south fulltime in 1995. His wife’s family had vacationed at the beach for many years and his brother lived in Wilmington so living at the beach had an appeal, although he loved his life in the north.

During his years in radio and TV, John said he was engaged in helping to draw people out. He encouraged them to join book clubs or take part in other activities.

After retiring to Myrtle Beach, John spent 15 years working with SCORE, the largest volunteer group of expert business mentors in America. He enjoyed helping individuals just starting out in business by offering his experiences and expertise.

He developed a real passion for helping Sav-R-Cats International, Inc., a nonprofit founded by local attorney, Harry Pavilack. The organization operates a no-kill shelter in Surfside Beach, providing safety for cats along the Grand Strand. The shelter is actively involved in a trap-neuter-return program for feral cat colonies. Additionally, he said, the organization provides assistance for spay and neuter services for pet owners making low wages and who might not be able to pay full price for veterinary care.

“Sav-R-Cats provides an adoption center and seminars and speakers to help educate the public,” John said.

The primary goal of the organization that was founded in 2002 is to ensure protection and humane treatment of cats. The shelter operates solely on donations and is run by volunteers like him. His continued involvement in the organization to save cats has earned him the name of ‘cat person’ but he says he is just a person who wants to help with this important mission.

John is so well known for his love of cats and his assistance in ensuring cat safety that he gets phone calls in the middle of the night seeking help.

“A woman called from Conway at 3 a.m. recently whose cat climbed up a tree. My name is online, so she called me. I went to help because I don’t want to see anyone in distress,” he said.

SHARING THE BEAUTY OF OPERA

Another of his passions is opera. An opera singer himself, he helped found the Grand Strand Opera Workshop. This nonprofit organization is dedicated to helping keep opera alive by providing scholarships to music students at Coastal Carolina University.

“CCU music faculty selects the students and we provide scholarships from $750 to $1,000 each year,” he said.

“Opera is a type of instrumental as well as vocal technique,” John said. “It is the way you use your voice. Not every person can be an opera singer. They may not have the power. Consequently, one of the interesting things is how you can perform with your voice with no microphones. It comes from the diaphragm. The beauty of opera is that it is very calming and sweet and tells a story. It is not always screeching like some people think. That is a misconception of opera and that it is boring. It is not boring!”

John said he was introduced to opera as a young boy. “I got hooked on it,” he said. He finds the music form filled with passages of beauty and works hard to help others realize this beauty.

He has enjoyed judging vocal students who have moved on to be singers, one in the Bavarian Opera.

“When the help you give turns out to be a success, to me that is better than any award or plaque. It is a human being you have helped,” he said.

While cats and opera may seem very distant from each other, they both hold a special place in John’s heart and he is willing to work hard to ensure that others see the importance of supporting both causes. However, he has many other volunteer interests.

SHARING HIS TIME AND TALENTS

For several years, John assisted with the Martin Luther King Jr. Day Celebration in Horry County in an effort to help revitalize an MLK observance, he said.

“I worked with Bennie Swans, chairman of the Carolina African-American Heritage Council and the MLK celebration, and was in charge of selecting awards for Carolina Has Talent, an event held in conjunction with the celebration. There is much talent here, people just don’t realize they have it,” he said.

For his efforts, he received an MLK Award of which he is proud but says receiving awards are not why he spends his time helping others.

When it comes to Thanksgiving, John also pitches in to help a local business owner who provides dinner for homeless individuals. Using his media talents, John provides public relations assistance and volunteer help. If he gets a call from someone lonely or in need of a ride to the dinner, he helps or ensures someone else does.

“That is what we do,” he said. “I associate my name with people in need but I don’t embarrass anyone.”

John also serves as vice chair of the Grand Strand Community Law Enforcement Appreciation Committee. For the last five or six years, he has helped connect “cops with kids” through the program that offers cookouts in the various Horry County communities. The program is designed to help bridge the gap between law enforcement, children and the community while encouraging support for law enforcement.

Since both John and his wife are veterans of the Korean War, they each were recently awarded a Blanket of Valor.

“We are the only husband and wife Korean War veterans living today in Horry County to receive this award,” he said.

John also worked to assist an archbishop in the Korean Church to establish a U.S. congregation in Myrtle Beach.

If John cannot help with a problem in front of him, he will find someone who can, he said.

“I am all inclusive. God put me here to help. I have a compassion for the lonely and the poor,” he said.