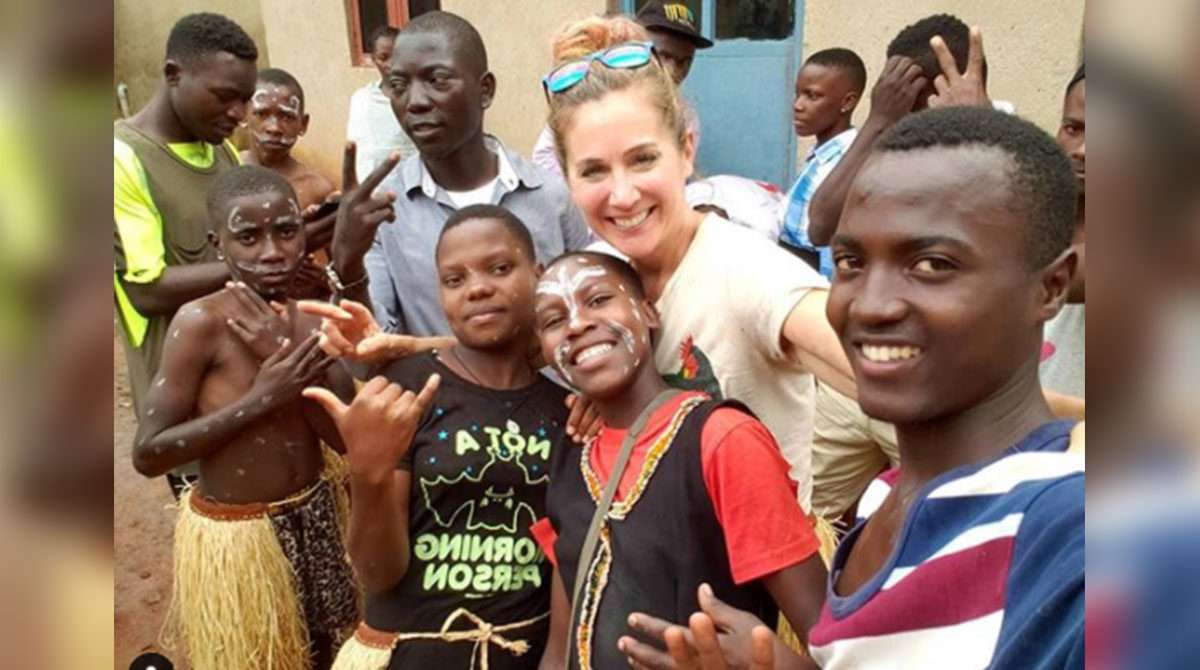 Whether she is collecting coats for the needy outside her micro-brewery and vegan café in Hendersonville, North Carolina, or feeding the hungry in earthquake-torn Puerto Rico, Lisa McDonald constantly shares her time and energy to help both her human and animal friends and the planet.

Described as an “unapologetic entrepreneur, philanthropist extraordinaire and lifelong animal advocate,” Lisa is an enterprising young woman who has keenly utilized her passion for love, kindness and compassion to build successful business ventures and to fulfill philanthropic goals. Her life’s journey brought her to the mountains of Western North Carolina where she not only opened a successful business, but started an animal rescue sanctuary and a nonprofit called the Kindness Empire.

Always the animal lover, Lisa grew up in the suburbs of Chicago where she would “drag home any kind of living creature that needed assistance,” she said. After studying broadcast journalism at Bauder College in Florida, she developed a career in global management and IT consulting. An intelligent woman who is a member of the high IQ society, Mensa, Lisa built a highly successful career providing management consultant services to companies such as Comcast Corporation following its acquisition of NBCUniversal Media.

Through her work and her philanthropy, she has traveled the U.S. and the globe living in Singapore, Australia, London and Los Angeles. She worked with business leaders in Global Fortune 500 companies helping them to streamline their processes, always finding ways to pursue her passions while fulfilling long-term contracts. After a while, however, she said living in hotels and “helping other people get rich,” became tiring. Although her career and travels had been “amazing,” she was ready to find her spot in a community where she could spend more time rescuing animals in need and giving back to the world.

Lisa and her partner, Joe Dinan, traveled in a van with their dog around the United States and during their journey they figured out where they could live and utilize the beautiful outdoors year-round. An avid hiker and vegan, Lisa wanted space to grow her own food and enjoy outdoor living. The couple settled on the Asheville area, finding three acres in nearby Henderson County.

“We visited the area and thought it was awesome,” Lisa said. “We decided this was where we were going to move. It is a beautiful property just two miles from downtown in an area called Flat Rock.”

For a while after moving to their new home, Lisa continued to travel and consult. Joe was working at a brewery while developing his own brewing skills at home.

“It was a crazy lifestyle,” she said about balancing her corporate life with raising kittens and chickens on a farm.

Together, the couple started developing a plan to open their own business, trademarking the Sanctuary Brewing Company name and developing a business plan. Within three months of writing the plan, they found a property.

“It was a blank canvas,” Lisa said. “There was no plumbing. We had to use a jack hammer to get the lines in so we could open the bar. It took six months and we opened in August of 2015.”

The business, she said, combined Joe’s passion for craft beer with her passion for human and animal advocacy and veganism.

As Sanctuary Brewing was born, Lisa was proving to the world that philanthropy and profit go hand-in-hand. She created the nonprofit Kindness Empire to encompass global work under three areas: emergency relief, animal advocacy and homelessness. Under that umbrella, she also founded Sweet Bear Rescue Farms, a micro-sanctuary operating on her farm where she currently has 45 animals that range from dogs to pigs to turkeys and numerous cats, some that share her home. There is also a revolving door of rescued and fostered animals.

Outside the brewery, Lisa designed a way for donated clothing, especially coats to be hung for the taking.

“It is barely an effort and such a cool way of helping people,” she said. “We could hang 20 coats and the next day, they would be gone.”

Called the “Kindness Wall,” the area provides a way for those in need to pick out seasonal clothing, umbrellas and even bags of basic necessities. Lisa also began a weekly meal free to the public every Sunday.

“We just put it out there that anyone could come eat, no questions asked,” she said. Tips were optional. That venture eventually turned into Help4Hendo (Hendersonville), a monthly community event. Help4Hendo operates with the help of Michael Cohen of the Saluda Hair Garage. The event offers individuals free haircuts, a warm meal, clothing, toiletries and even pet supplies. Lisa’s fundraising efforts at the brewery over the last four years have resulted in $20,000 in donations to help environmental, social justice and animal advocacy charities, she said.

Several times Lisa has had opportunities to leave the country and help in foreign lands. She traveled to Rwanda in Africa to work with the Africa Healing Exchange, a group founded by Sara Stender of Asheville to assist women survivors of genocide. The women make tea called Ubuzima.

“Rwanda lost 10 percent of its population in 30 days. This was so outside my comprehension of how humans behave,” Lisa said, adding that genocide continues to happen in that country. Lisa traveled with photo journalist Daniel Turbert of The Sentient Project and they were asked to help share the women’s stories with the world.

Lisa also assisted the Podrska Foundation, a vegan advocacy group in Uganda working with a population of HIV positive women who create beautiful crafts. Lisa said some of the greatest needs there include shoes for the children and sewing machines for the 12 women sharing two machines.

Her small group also met with a young man who started an orphanage school. She and her associates taught the children how to use cameras and bought them a laptop and two computers they could use at one house with electricity.

“It was the most life changing experience with the highest highs and lowest lows. These women who are literally dying of AIDS were thinking about school for their kids,” she said. Her plans, which have been temporarily halted by the COVID-19 pandemic, include doing some fundraising in the U.S. for the groups she visited.

Lisa continued her international philanthropy, traveling with a friend, Calen Otto, to Puerto Rico in January 2020 to provide assistance following devastating earthquakes. The two worked with an organization called Chilis On Wheels, a food relief effort operating out of San Juan.

“We provided boots on the ground. Every day was well planned out. I reached out to get donated items before I left. We went right into the eye of the earthquake zone where no one trusted anyone,” she said.

Lisa said FEMA was there but there was no real infrastructure and the locals did not trust the government. Families were setting up mini-camps to work through the crisis together, she said. She saw families living in the mountains away from everyone and her group was able to provide them with bags filled with necessities as well as pet food. They also cooked for them, all the while promoting veganism.

“It was such a great feeling. The people had stuff but what they needed was emotional support,” she said, adding that they helped feed more than 300 people and animals during their short visit.

As an animal advocate, one of the hardest parts of her trip to the devastated area, she said, was seeing the abandoned and starving animals. At one place, a horse had been tied to a rope and left with no shade, food or water.

“There was a lot of devastation from the hurricanes that have left many parts of Puerto Rico damaged. We saw a lot of sadness,” she said. One bright spot, however, is that Lisa adopted a kitten she named Rico and brought home to her sanctuary.

LOOKING TO THE FUTURE

Lisa’s busy lifestyle has kept her involved in the community as an animal advocate and vegan subject matter expert. She has been recognized as a “Person of the Week” by the local ABC TV affiliate WLOS for her global humanitarian work. In 2019, she was listed in “Women You Should Know” by Know Tribe Asheville and has been written up for her entrepreneurial and humanitarian work in numerous magazines.

Due to the success she had at her brewery, she was elected in 2019 to the N.C. Craft Brewers Guild and is a member of Farm USA. As a visionary leader, she is a frequent presenter on animal rights and veganism, which she feels could help curb viruses like COVID-19 spreading from animals to humans.

While the COVID-19 pandemic closed the doors of Inconceivable Café in late March as restrictions affected businesses across the nation, Lisa said it has been a time of great sadness while also providing a silver lining for her personally.

“I feel like the pandemic put the brakes on for me,” said the 51-year-old ambitious entrepreneur who never seems to stop for rest. “I can relax. Something I have not done for 20 years. It’s the life I signed up for and I just have to block out some time for myself. A lot of sanctuaries fail because the operators do not take care of themselves, too.”

As the solo caregiver of the 45 animals on her property during the pandemic — including one new rescue puppy named Banko, which means everlasting — Lisa said being able to stay at home has been a blessing. It has also given her time to scout a new location for Sanctuary Brewery, which will move from its current location in early June allowing Joe to open a new venture, Oklahawa Brewing Company, at its current site. Her new location will be more conducive to reaching her goal of combining the brewery with a café and a venue for weddings, yoga, educational classes on brewing, cooking vegan food and animal advocacy all in one place.