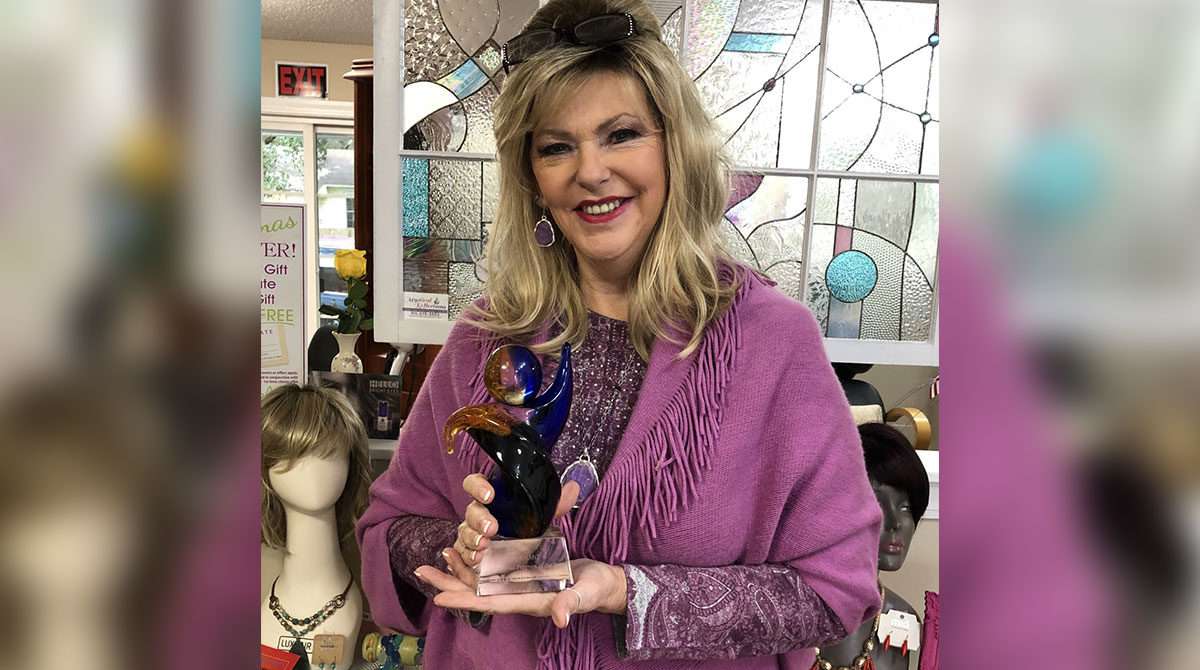 A cancer survivor, Marlisa Small has a deep and personal understanding of what it feels like to face death and knows the heavy toll the disease takes on one’s body and mind. She acutely relates to the way a woman feels when she loses her hair to the stress of cancer or often due to the aggressive medical treatments she chooses to undergo in an attempt to extend her life.

According to the American Cancer Society, an estimated 1.7 million people in the United States (a large part of them women with breast cancer) will be diagnosed with this potentially deadly disease in 2019. Of those, more than 600,000 will die of the second most common cause of death in the U.S., exceeded only by heart disease.

Fortunate to have survived her diagnosis of stage four cervical cancer, Marlisa has dedicated her life to helping other patients battling to defeat the disease and feel better about themselves through her nonprofit Bold & Beautiful Wigs for Cancer ministry. A grateful survivor, Marlisa turned tragedy into philanthropy and humanitarianism.

HOW IT ALL BEGAN

Growing up in Greensboro, North Carolina, Marlisa was one of five children raised in a faith based Christian home. Gospel music was always a huge part of her family life and has carried over into her adult life. Music and singing were her therapies when she was diagnosed in 1991. While she declined chemotherapy, radiation and supplemental hormone treatments, she did undergo a radical hysterectomy.

A 33-year-old single mom with three children, her diagnosis came with no warning.

“I had no symptoms except I was tired. I was raising three children and working three jobs. I had a pap smear the year before but suddenly I had absolutely no energy,” she said.

Once diagnosed, she had her surgery at Baptist Hospital in Winston Salem, N.C. Marlisa said the woman who shared the hospital room with her died from the same cancer. Marlisa’s first thought was that she was going to die. She was worried about who would raise her children.

“In 1991, the treatments were so aggressive. I had an aunt with breast cancer and two uncles who died of bone and lung cancer. I related it with a death sentence because of my family history. When I left the hospital, I knew I had a certain amount of days and I wanted quality days. I walked out of that hospital on faith and here it is 28 years later,” she said.

Today, Marlisa tells everyone she has been healed for 28 years.

“I went back to find my doctor and a tear rolled down his cheek. He said, ‘You are a miracle’ and I said, ‘I know.’”

Up until her cancer diagnosis, Marlisa had worked in the jewelry business in Greensboro, N.C. Her illness made it impossible for her to return to long hours of standing on her feet so she re-educated as a licensed nail technician. Because she had lost her hair due to the stress of the illness, she decided to buy some wigs to sell in her salon. The first two dozen sold quickly and she bought two dozen more and her business quickly outgrew her space at the salon. Now a beauty educator as well, Marlisa traveled to teach. On a visit to Georgetown, S.C., she was teaching at a New Beginnings salon. A friend invited her to stop for a visit in Pawleys Island and that visit in 1995 changed the course of her life.

“I was standing on that porch and God said that this was where I needed to be. It was so peaceful. God spoke to me that day and I went back, sold my home, brought my 16-year-old daughter with me and moved to the beach. God had a purpose and mission for me. He knew before I did,” she said.

Marlisa opened her business and began working closely with the American Cancer Society’s “Look Good, Feel Better” program that provides good used wigs to patients diagnosed with the killer disease. While Marlisa said she appreciates the organization and the program, she feels women deserve new wigs, not ones that are returned and may have been worn by someone who died. During her battle to survive, she said she made a promise to God to give back. She said she understands a woman’s need to feel human again and not be stared at because she has lost her hair.

“Here’s that little voice again saying give these women new wigs and make them look good again,” she said.

So, 9 years ago she created her nonprofit Bold & Beautiful Wigs for Cancer that has distributed some 9,000 free wigs, including those for children. The nonprofit benefits from various fundraisers that help raise $350,000 so that on average, 10 wigs a day are provided to those in need of them.

Marlisa said doctors carry cards with them to hand out to patients who then contact her.

“Some women say they are more attached to their hair than anything,” she said.

Marlisa, thanks to her beauty business background, is able to go by photos to match hair color and she mails wigs all over the United States and has even sent some to Germany and Brazil. The first wig is always free regardless of a person’s ability to pay, she said, and then recipients can purchase additional wigs from her shop if they choose to.

“For every wig I give away, God blesses me with selling two,” she said, noting she likes to think of her business in Little River, S.C., as a “healing spa” where her employees specialize in cancer massage.

GAINING RECOGNITION FOR HER WORK

Marlisa started her mission to distribute free wigs with just $50 in product. Her first recipient was a woman named Cathy Hayes who had been diagnosed with breast cancer.

“She came in crying with her husband, Joe, and he said the wig looked just like her hair,” Marlisa said. That visit was the beginning of something greater than Marlisa could ever imagine.

Through all her struggles, Marlisa has continued to inspire people through her singing and often performs at various fundraisers. She organizes two fundraisers a year, Bold & Beautiful Wigs for Cancer gala in February that provides free custom wigs for individuals undergoing chemotherapy treatments. As well, she is an avid supporter of Camp Kemo, a week-long summer camp for children with the disease and organizes a fundraiser called Bold & Beautiful Buddies to help with the cost of the camp.

Marlisa was named Ms. South Carolina Senior America in 2018 and was selected as a top 10 finalist at the national competition. She performs the National Anthem on Veteran’s Day each year and has received recognition from the Veterans Center. She was named Rotarian of the Year in 2009-2010 and was recognized for her fundraising efforts for the North Strand Homeless Shelter. In 2017, she received the Martin Luther King Community Service Award and has assisted with a golf fundraiser that gifts a dog to children with diabetes.

In May 2019, Marlisa had another health scare. She suffered a TIA or mini-stroke. She was in the hospital for three days and could not talk, she said, but again, music and singing became her therapy.

“I was working on a Camp Kemo fundraiser. I am 62 now and I don’t worry about it. If I go, it will be in a great way. When you are at death’s door, you don’t fear anything,” she said.

Healing and back to performing as a variety singer again, Marlisa has had to re-evaluate her life and learn how to turn down some requests for her time and energy. She said music is healing her.

“I get more out of song. I love music and how it makes me feel,” she said.

Marlisa added that she feels it is important to leave a legacy.

“Doing something people can remember us for—that’s what is important for me,” she said. “You just have to leave your mark in this world. The reward here is nothing like it will be when we leave this world.”

Marlisa said her life has been filled with sharing a lot of happy tears and miraculous healings.

“There is nothing pretty about cancer. I am just thankful to be here,” she said. And, while here, she will continue to share her God-inspired mission to help others.