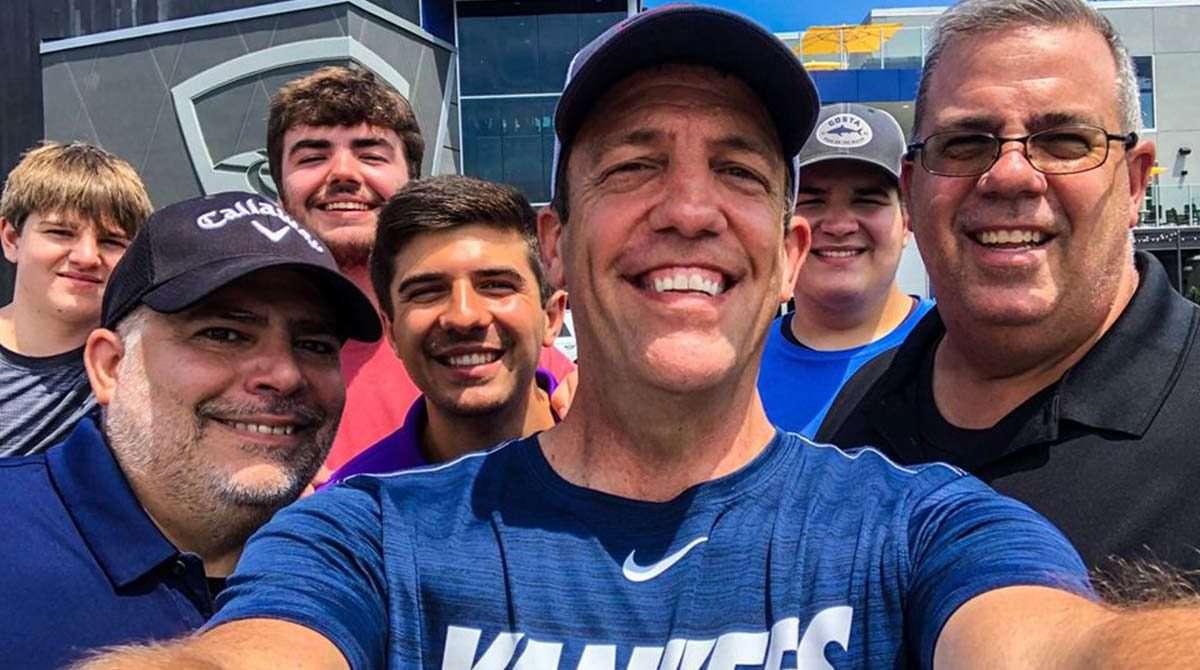 If you live in the viewing area of ABC affiliate WPDE-TV 15, you know Ed Piotrowski. The chief meteorologist for more than 25 years, Ed is the face of the station as well as the face of so many volunteer activities and events in the area.

“I do about 150 different things each year whether it is speaking to a school group or judging an event,” Ed said. “I love doing that stuff. It is just so much fun.”

Although Ed said participating in community events and activities, helping nonprofits or visiting schools, is the “easiest part of my job” compared to sitting in front of a computer preparing the weather forecast, his participation is voluntary.

“They [the station] don’t require me to do anything. For me, helping whatever organization I can help does my heart good,” he said.

While Ed was born in Hawaii and lived there until he was 2, his home was wherever his military dad took the family. He lived in California, Texas and both Carolinas but for the greater part of his life he has called South Carolina home.

In 1992, Ed left New Bern to join WPDE-TV 15, a Florence-based station, and has never looked back. The easy going, friendly weatherman quickly began to get involved in the community, which he said has been a “win-win.”

“As much as I love doing the weather, I love that my job gives me a platform where I can help raise awareness for things going on in the community,” he said.

For more than a decade, Ed has served as chair of the local American Red Cross Heroes’ Campaign, a program that has raised more than $1 million to date to help fund Red Cross response. A T-shirt project with shirts bearing Ed’s image and #ThatsWhatEdSaid has already raised some $10,000 for this year’s campaign, he said.

He is also very active with the American Cancer Society, offering his help in memory of his younger brother Matt who died almost 10 years ago from cancer.

“I speak to a lot of veterans groups, specifically on Memorial and Veteran’s days,” he said. Bobbleheads in Ed’s image are being sold to raise funds for the Wreath’s Across America project.

“It was so sad to see how many veteran’s graves did not have wreaths on them at the National Cemetery in Florence,” he said. The fundraiser will help to ensure each grave has a wreath in future.

Of the dozens of events Ed attends or presides over, most of them are connected to schools. From kindergarten to high school classes, Ed prepares talks that fit the age group. The class is then videotaped with the video airing that night on the news, he said.

“They get to know me, they get to be on TV and everybody wins,” he said.

While his job does not allow him time to sit on boards of directors, he does serve as master of ceremonies for numerous charities.

“Honestly, I just really love being involved in helping a good cause. I like to see it come to fruition. If I can give back and help out—even with something as simple as taking a picture—if that puts a smile on someone’s face, that is pretty dang encouraging to me,” he said.

With a 28-year history in the weather prediction industry, Ed has garnered some significant recognition for his work. Following his constant on-air updates during 2018’s Hurricane Florence, Ed was nominated for an Emmy award.

“I didn’t win but I was happy with being nominated for my work,” Ed said.

He has been named Best Weathercaster in the Carolinas by the Radio Television Digital News Association of the Carolinas. He was twice named Best Weathercaster in South Carolina by the S.C. Associated Press and once by the S.C. Broadcasters Association, which presented him with the Honorary Life Membership Award for “demonstrating exceptional service to broadcasting in South Carolina.”

In 2018, Ed received the John Coleman Broadcast award, a national recognition for his coverage of Hurricane Florence before, during and after the storm passed. This national recognition prompted members of the S.C. House of Representatives to sponsor a resolution recognizing Ed’s 25 years of dedicated news coverage to the area.

For the last 15 years, Ed has been named Best of the Beach in local competition multiple times. In 2018, he was recognized as Citizen of the Year by the Myrtle Beach Area Chamber of Commerce. He was also nominated for the National Hurricane Center’s award for outstanding efforts to educate and inform the public about hurricanes and hurricane preparedness.

Ed has shared his extensive knowledge of tropical weather with thousands of individuals in his community, ensuring they are prepared when dangerous weather situations arise. However, sharing his weather knowledge on-air from inside the TV studio or during a presentation at a school, church, civic event or charity function is only one piece of the puzzle that makes up his life.

“The reason God put me in this position is not just to tell the weather, but so I could use my high profile TV position to help others and maybe help them get to the next step in life,” said Ed, who added it is refreshing that people feel they can easily approach and talk to him.