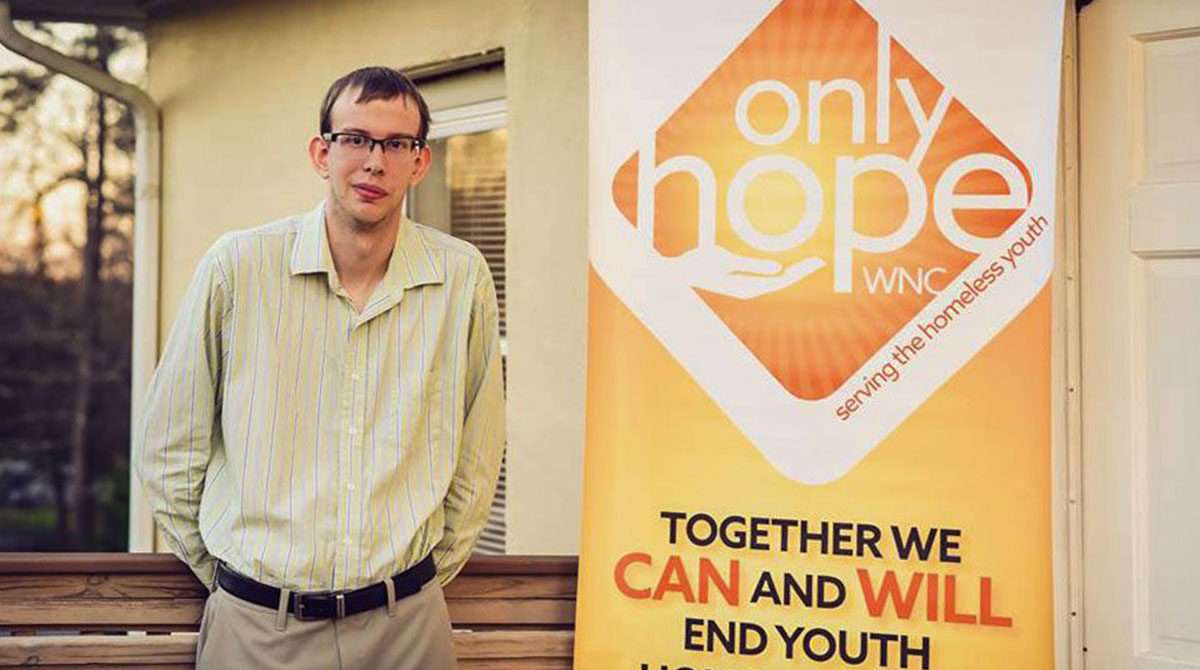 His wasn’t the typical homeless experience. He wasn’t living out in the weather in a cardboard box. He wasn’t cowering under a bridge trying to fight off the elements. He wasn’t struggling to survive on the streets like so many homeless youth. But, as a senior in high school and for more than a year, Michael rose from a bed at a homeless shelter and made his way to classes determined to make his way in life in spite of the living situation he had been thrust into.

Michael’s plight was not unique when he found himself a homeless teen, and it is not unique today. Current statistics show that an estimated 4.2 million youth and young adults in the U.S. experience homelessness annually. Some 700,000 of those are considered “unaccompanied minors,” meaning they are not part of a family nor do they have a parent or guardian with whom they live.

Michael fought his way out of homelessness. But, that experience of not having a stable home and a loving family to return to each night left him with a burning desire to help others in similar situations. To do that, he started a grassroots movement to establish what is now the nonprofit Only Hope WNC serving homeless boys.

An only child, Michael still finds it a little difficult to explain exactly what happened during his childhood that resulted in him moving in and out of 11 different schools along his path to graduation.

“There were a lot of factors involved from early childhood,” Michael said. “I was being moved around. In middle school I was with my mom and stepfather living in a situation that was verbally abusive.”

To help stabilize his life, his grandmother moved him in with her and he lived with his grandparents until she died of cancer.

“After grandma passed, there was a lot of stress on my grandfather and we didn’t see eye to eye,” Michael said.

His grandfather remarried and that is when, at age 18, he moved to a Buddhist operated homeless shelter called My Place.

“I never will fully understand it. I had to leave to do what I needed to do to be successful,” he said. “There were deeper underlying factors; it was just time to move out.”

For Michael, unlike many homeless youth, he had family that cared about him. “I have a lot of family, tons of cousins, who do care and always did. They just didn’t have the capacity to help,” he said.

While his stepfather eventually died of a drug overdose and his mother has been in assisted living for some 14 years, it was alcohol and economics that played more of a role in his family’s dysfunction, he said.

With support of an “adopted” family who cared about him, Michael said he was eventually able to move out of the shelter into his own place. When the shelter that had provided him with some stability soon closed, however, it left Michael with a deep concern for other youth like himself who were still in need and struggling.

One consistent thing in Michael’s life was his church. He had always attended First Baptist Church in Hendersonville and still does.

“I was raised to have faith. Faith and fellowship have always been key,” he said.

Working jobs in the community to help put himself on track to independence, Michael began sharing his concerns about homeless youth with community members and his high school principal.

“I was talking to him to figure out ways to help and I began to realize that more and more people were also realizing there was a need to help,” he said.

What Michael saw were local youth “couch surfing,” bouncing from one friend’s home to another, sleeping on couches or park benches. He was working two jobs, making his way in life, and with referrals through the school system started finding ways to provide for small needs: a toothbrush here, money for a school annual there. Providing personal hygiene products or covering hotel expenses for a homeless family was made possible through donations.

His goal was to help with minimal paperwork and restrictions by not relying on government funding; to be flexible to each youth’s needs. Beginning with a pantry filled with necessities such as school supplies and simple basic needs plus food that teens would eat, Only Hope WNC started taking root in the community. Informal host homes were sought out where homeless students could live until graduation. In emergency situations, hotel rooms were rented.

Funding came primarily from an annual “Sleep Out” that Michael hosted – and still hosts – on the front lawn of the historic Hendersonville courthouse located on Main Street of a quiet and quaint mountain town attractive to retirees. Holding the event in early November in a very visible place helps keep the youth homeless crisis in the forefront. Business sponsorships and other donations come often from groups with each participant making a $25 suggested donation and bringing a sleeping bag, tent, box or whatever means they prefer for sleeping outside.

DREAMING OF A DREAM HOME

Armed with the knowledge that 200 to 400 Western North Carolina youth each school year face homelessness, Michael’s dream was to establish a home; a place where he could at least help some homeless boys. While working as a teller at Wells Fargo, something happened that helped bring his dream to fruition.

Michael was chosen from among the 25 million people employed by Fortune 500 companies, including Wells Fargo, to be recognized by Fortune magazine’s “Heroes of the 500.” He was one of 55 individuals in 2015 selected for a $10,000 award recognizing “extraordinary acts of bravery, kindness and selflessness” that helps to change people’s lives.

It was recognition that helped put the national spotlight on what was often an invisible plight of young people in his hometown and across the country where the National Center for Family Homelessness reports that on any given day some 200,000 U.S. children are without a place to live.

With the award and community support, Michael was able to find a house and the Dream Home program began, allowing up to six young men to live there as long as they need. Michael said there is no specific time limit, the training and encouragement helps the youths to move out on their own after graduation without relying on food stamps or other government programs.

“I have always had the philosophy of not setting limits on youth,” Michael said. One size does not fit all at Only Hope. He said no good parent would push a child out the door until they are ready and that is how he looks at the youth who come to live at the Dream Home.

“We look at each individual and what their needs are rather than using a systematic way of doing things. When working with youth and families, you have to be flexible,” Michael said.

Michael steers away from how government agencies operate so Only Hope can provide what is actually needed as it is needed.

“One kid we work with might need only $50 worth of clothes while another may have nothing at all,” he said. “It has been great to be able to provide a different type of assistance; to do something out of the box, because we just try to be there for the youth we work with. Every case is different and at the end of the day, we can sleep well knowing we are helping.”

As President and CEO of Only Hope WNC, Michael works closely with area schools and just rotated off a four-year commitment to the school board. His high school principal is now the homeless liaison for the county. At 31, Michael lives at the Dream Home, but his work there – like that of everyone else – is volunteer. He currently works side jobs doing property management and website design to support himself.

As a community organization, Michael said Only Hope WNC accepts help and is always open to ideas. “There are no bad ideas,” he said, adding there are also no donations too small.

“We have one person who donates $5 a month and that donation is just as important as a $1,000 donation,” he said.

The organization has also developed a basic needs closet and food pantry in Zirconia, N.C., not far from Hendersonville. The Olive Branch Food Pantry is a MANNA Food Bank partner and has been especially helpful during the COVID-19 pandemic, he said.

With all volunteer help, Only Hope WNC’s overhead is kept at 3.5 percent, he said. For Michael, it is his mission. It is where he is supposed to be, he said. He is committed to keeping kids in school and on a path to success.

His work, along with community support, has provided help of some type to more than 11,000 youth to date.

To learn more about Only Hope WNC and how you can help, visit OnlyHopeWNC.org