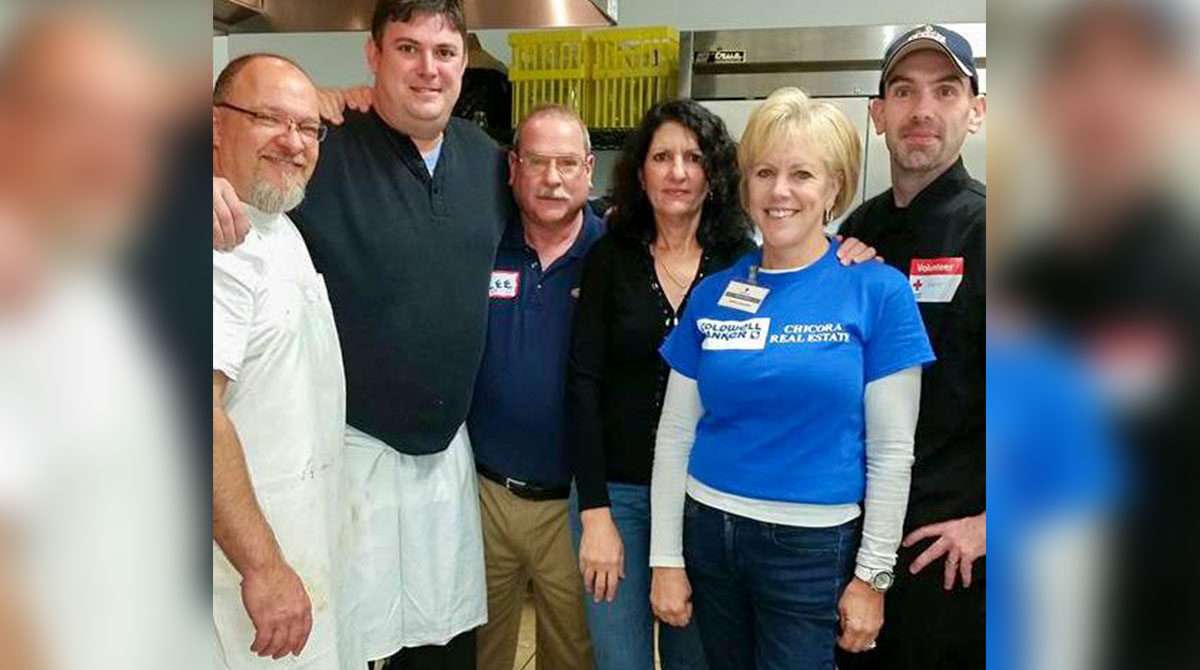 During the Christmas holidays, you will most likely find Mike Arakas wearing an apron and preparing breakfast for the dozens of volunteers prepping food for a Community Christmas Day Dinner. Serving as treasurer of the board of directors that oversees the event that this year served some 9,000 free meals to those in need is just one of the ways Mike gives back to his community.

For Mike, volunteering—a character trait instilled in him by his parents—comes naturally.

“I feel like it is kind of a duty to give back to the community when you are successful,” said Mike, owner of Crabby Mike’s Calabash Seafood Buffet in Myrtle Beach, South Carolina.

The oldest of the four children of James and Brenda Arakas, the Myrtle Beach native spurned the option of becoming a lawyer to follow a career choice already engrained in him from childhood. He followed in his dad’s footsteps building a career in the restaurant business much to his dad’s dissuasion.

After majoring in economics at Wofford College, a private, independent liberal arts college in Spartanburg, South Carolina, Mike attended law school for two semesters. However, his heart and mind were taking him down a different path.

“I went to law school, but the restaurant business was in my blood,” he said. “Dad didn’t want me in the business because he knew it was a lot of hard work and would take time away from my family.”

Mike said in the days that his dad was building a career in the restaurant business around Myrtle Beach, he would often work so many hours that he would sleep on a cot at the business.

“My mother was a saint,” Mike said. “Dad worked 24 hours a day, but they both did a great job raising my two brothers, sister and me. They instilled in me good values.”

The close knit family still lives within two miles of each other.

Mike said he got his first job at age 9 working on the beach as a “beach monkey” for the lifeguards. Encouraged by a financial match from his dad, he put away $8 in the bank each payday and kept $2 for candy. When he reached $2,500 in his savings, he purchased his first stock.

Though his parents were busy people, they watched closely over the welfare of their children. When 12-year-old Mike was caught one day on a sailboat without a life jacket, he said he was literally pulled by the ear off the beach.

“My restaurant life started the next day with me washing dishes. I worked weekends during the school year and summers working every position from dishwasher to cook to dining room manager,” he said.

With his dad still urging him to do something outside of the restaurant business, Mike left law school and leased a restaurant in a motel where he served breakfast and lunch for the next six years. During that time he continued to look for other options. When Steere’s Calabash Seafood Buffet became available right after Hurricane Hugo devastated the beach area and caused some damage that shut the restaurant down, he bought it. He purchased the business in March 1990 and reopened it in April.

For the next seven year’s Mike operated Steere’s. In 1996, he closed for renovation. Four days before it was to reopen, the building burned to the ground due to an electrical short. The fire was encouraged by 30 mile per hour winds, he said.

“It was pretty devastating,” Mike said. But because the property had appreciated over time, he and wife Wendy rebuilt and opened the doors of Crabby Mike’s in June 1998.

A big part of Mike’s business is giving back to the community by supporting benefits. To make things work and to share the values he was taught, he hires employees telling them upfront they will be working for a community-minded business.

“I expect them to participate and put some effort toward some of the organizations that I support,” he said.

Mike said he has a great staff who are always willing to help with charitable benefits but also to help each other. He is a huge believer in teamwork making the world a better place.

“We raised $2,500 for one of our prep cooks on an insulin pump who couldn’t afford the out of pocket increase for insurance. Every night at the end of the evening, the staff would put money in the bucket and we were able to give him a monthly allowance for medicines. That was all staff generated,” he said.

There are so many ways that Mike, his family and his staff reach out to help those in need. For the last 22 years, Crabby Mike’s has hosted an annual Myrtle Beach Area Hospitality Association Public Safety Appreciation Luncheon feeding some 450 leaders and officers of public safety. When cash tips are left on the tables, the staff collects them and chooses a project to support with Mike matching the total tips.

In 2019, those tips went to help feed hungry school children.

“I had read about kids owing lunch money in school and how they had to go to a different line. I hated the fact that kids were getting stigmatized and labeled when it was not their fault,” Mike said. “A school counselor used to work for me in the summers selling tee shirts, so we were able to give her $1,500. She used it to pay all the debt at Saint James Intermediate School and at another school and left a cushion for future credit. We also put $100 toward a student fundraiser for a student with cancer.”

News reports showed that students in Horry County owed close to $60,000 in school lunch debt for the 2018-2019 school year. Such debt is not unique to the county and has been a topic of conversation across the nation with various businesses such as Crabby Mike’s taking on the challenge to help out.

Another of Mike’s ongoing philanthropic efforts is the Christmas Day Dinner. He has been involved for close to 15 years and said, “I’ve enjoyed every year of it.”

Again, Mike’s staff is fully involved in this effort that supports a need in both Horry and Georgetown counties. His chef, general manager and sous chef take charge of the food ordering and coordination, making deals to get the best prices and buying early and storing in the restaurant’s freezers. Other managers and employees at the restaurant help with daily prep work. It is a massive effort by hundreds of volunteers for anyone in need of a hot meal and/or fellowship on Christmas Eve at the Georgetown County feeding site and Christmas Day at the three Horry County sites.

Other organizations Mike supports through financial donations and assistance are Make-A-Wish Foundation South Carolina, Tara Hall Home for Boys, the Community Kitchen of Myrtle Beach and Street Reach Ministries of Myrtle Beach. For some 20 years he has assisted South Strand Helping Hand’s food distribution ministry in Surfside Beach. Other charities include the Ronald McDonald House Charities of Charleston, SOS Health Care, Inc., and Help 4 Kids & Backpack Buddies focused on feeding the children of Horry County plus other smaller charitable donations.

He also provides alumni support to Wofford College where Wendy was a cheerleader when he met her there. Together in 2019, they started an endowed scholarship fund for football.

For Mike, giving back just comes naturally. He has a passion for helping others.

“If you have been blessed with success then you should take care of the community that helped you be successful,” Mike said.

Because of his philanthropic efforts and generosity, many children and adults in the area are better fed and receive a boost in life.