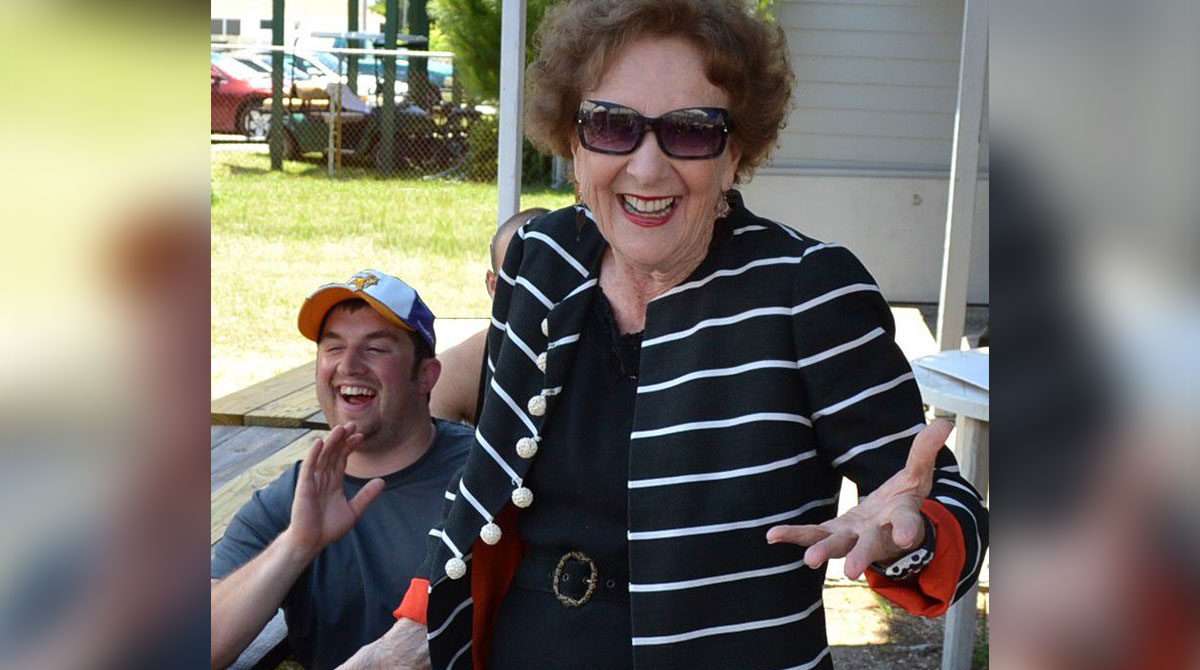 Born into the rural farm life of southeastern North Carolina, Muriel Ward O’Tuel, Ph.D., developed a burning passion for education that has helped her soar higher than she ever thought possible. She has not only inspired students throughout her career as an educator but has continued to mentor and inspire a love of learning through her numerous acts of volunteerism and philanthropy as a retiree.

One of the things she is most proud of is that her son and grandchildren are now following in her footsteps, giving back to the community through volunteerism.

“The thing about being a volunteer and caring about philanthropy is that it goes from generation to generation. I take pride in seeing my son and his family giving back,” she said.

From ‘Country Bumpkin’ to International Educator

Muriel O’Tuel uses the term “country bumpkin” to describe herself as a young girl. She wore feed sack dresses her mother made at home and her life followed a triangular pattern that took her from farm work, to school to church and back. Although a humble farmer’s daughter from Columbus County, N.C., who felt less than equal to the town girls in their frilly dresses, she had a thirst for learning and an innate yearning to see the world. As a child, Muriel soaked up information like a sponge, eager to discover the world outside rural farm life where the Bible was the sole textbook and long prayers replaced bedtime stories. When she continued her education after college and pursued her doctorate, a neighbor asked her dad why. She recalled his response was, “She’s gonna git all you can git.”

Education and travel were not something her family understood. Content with their quiet way of life, her siblings chose to remain on the farm or nearby never spreading their wings to fly the coop as she did. The fifth child of eight, Muriel was intrigued by the wonders of the world and after just one day in school with a nurturing teacher, her world changed forever. She had such a passion for learning she attended 12 years of school without missing a single day.

“After a few weeks of being in school with my first grade teacher I knew I wanted to be just like her,” Muriel recalls. “That’s why I became a teacher.”

For a child who had never heard of Humpty Dumpty, she was “turned on to school” after listening to her teacher read stories like “The Adventures of Babar the Elephant.” Numerous adults along her life’s path recognized that eagerness to learn and played a role in Muriel’s progression from farm girl to educator, psychologist, author, and eventually as assistant to the superintendent of Horry County Schools–South Carolina’s third largest school district in a county covering 1,255 square miles.

As her career progressed in a positive way and her life was full with a husband and two sons, a few unexpected twists and turns were thrown her way. In 1986, just months after she accepted the Horry County Schools position, her 23-year-old son who was then a medical student, died unexpectedly and was buried on Christmas Eve. Her husband Maxcy, who had served as school superintendent in Dorchester County, S.C., underwent two open-heart surgeries and died in 1995, leaving her to tend to the family’s rental business in North Myrtle Beach, S.C. Through the highs and lows, Muriel used her positive attitude and love of education and mentoring youth to persevere.

Through the years, she learned that it does not matter if you are the beauty queen riding on the parade float or the farm girl perched on the fender of the fertilizer truck, the audience is the same. There is always more than one way to make dreams come true. She has used that knowledge and her life’s lessons to encourage young people to grow in character and be the best they can be.

Life is Full with Retirement Volunteerism

Although she has stopped working a full-time job, retirement holds an entirely different meaning for Dr. Muriel O’Tuel than for those who retire and sit down. Not a quitter, she has filled her life with meaningful activities that she says have allowed her to continue to grow and have provided her with an active and rich life during her senior years.

In addition to promoting her first book, “Footprints on the Heart: The Caring Path to Prosperity,” and writing a second book, “Footprints Are Forever,” she launched Muriel O’Tuel Presentations placing herself on the market as a motivational speaker and storyteller.

She has traveled the world as a speaker through her association with DKG International (Delta Kappa Gamma Society), a professional honor society of key women educators working to impact education worldwide. A member for more than 20 years, she has been a keynote speaker at conferences as far away as Estonia. Among her numerous commitments in 2019 is a speaking engagement at an educational conference in Iceland.

So much of her work is volunteerism, as it continues to be important to her to improve opportunities for young people to become educators.

Locally, she is a member of the Coastal Carolina University Board of Visitors in the Spadoni College of Education, serving as chair for the last nine years. Falling under that umbrella is the Teaching Fellows program where she serves as an advisor for a program that focuses on the development of quality teachers who are passionate about teaching.

“Such teachers change the world forever and I am ecstatic to be involved,” she said.

Muriel is among the list of inspiring women recognized at the Women in Philanthropy and Leadership Conference hosted annually in Myrtle Beach by Coastal Carolina University. Additionally, she has become active with that organization’s annual conference where national speakers inspire more than 700 attendees each year to become focused on philanthropy and leadership.

Over the last decade, Muriel has volunteered with the nonprofit Waccamaw Community Foundation, chairing its grants committee matching donors with programs they care about. Through her work on this committee, she is able to go out into the community to visit each applicant and learn firsthand what each nonprofit organization has to offer.

She has also served as a leader and mentor for the last 15 summers for students housed in her family apartment complex visiting the Myrtle Beach area through the CRU (Campus Crusade for Christ) program. Most of the students come from the Midwest, she said, and knowing them has provided her a way to fulfill a life’s goal.

“I had traveled to every state in the U.S. but North Dakota and was invited in 2017 to come to that state to speak at Minot State University and connect with students from the summer project. So I closed my bucket list of doing something meaningful in all 50 states,” she said. “Through my volunteerism, I have met more people than I could have ever known.”

Standing on the Shoulders of Others

Life’s hardships have helped mold Muriel into the person she is today. She learned to think outside the box and visualize life outside of the farm where family life was very sheltered and limited. She came from a family where uneducated parents saw their seven living children graduate from high school and were so proud of that accomplishment they framed the diplomas to hang on their bedroom wall. However, they saw little reason to go beyond that educational level and never fully understood their daughter’s relentless efforts to improve her educational status. The first person in her family to earn a college degree, she credits her teachers for encouraging her and a principal who advocated for her to get into St. Andrews Presbyterian College on a work scholarship as well as an uncle who signed a $1,000 loan.

Muriel says she succeeded by “standing on the shoulders” of people who believed in her full potential like her high school English teacher Beth Woody who insisted she compete in her hometown Voice of Democracy contest. This was Muriel’s first public speech. She won and this set the stage for her speaking career. It was her dear friend Lois Snavely who inspired her to love art, music and “all beauty in God’s universe.”

Subsequently, she has devoted her life to helping others succeed. Every Christmas, she writes a letter to friends sharing some positive thoughts. In 2018, she wrote:

“All of us are standing on the shoulders of others who impact our lives forever. Each January, I make a list of at least five people that I wish to personally validate my appreciation, respect, admiration and love. Intentional living, not good intentions, is the key to living without regrets. Now is the time to shift our thoughts from wanting to doing. We can’t go back and make a brand new start, but we can start now and make a brand new ending.”

This year, Muriel has visited three individuals she has learned from, all of whom are in their 90s. “They inspired me to be the person I am today and they must know that I appreciate, admire, respect and love them,” she said.

There is no age limit for Muriel O’Tuel to stop sharing her time, knowledge and inspiration with others. Like the Energizer Bunny, the marketing mascot of Energizer batteries, Muriel just keeps on going and going and going. On the Strengths Finder 2.0 assessment, Muriel’s top strength is maximizer. Using this strength, Muriel says she feels compelled to nurture, refine and stretch others to cultivate excellence using their own strengths.

“Because of all the help I have received along the way, my mission in life is to inspire others to reach heights they never dreamed possible,” she said. “This passion is the fuel that keeps me motivated and moving. I must live today the legacy I want to leave.”