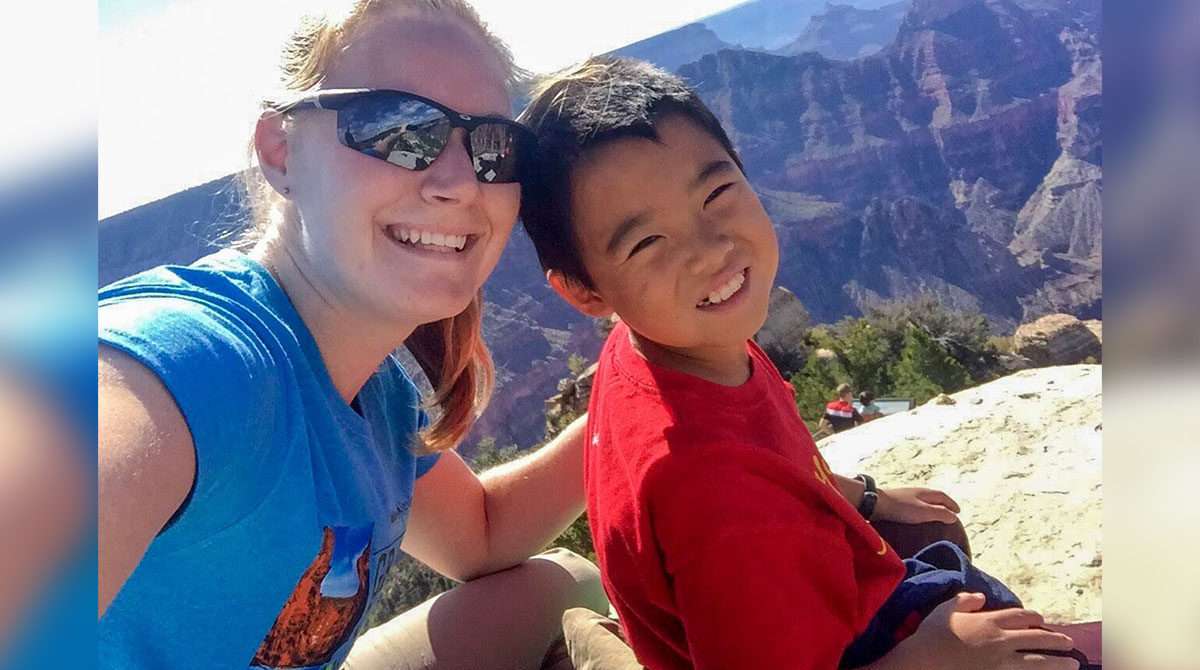 On January 10, 2020, Rachel Balson, 30, of Hendersonville, North Carolina, made a touching post on Facebook: “I sit here with tears of gratitude and amazement in my eyes as I write this. This story could have been written by none other than God Himself. He’s always at work in ways we can’t even comprehend.”

Rachel’s post was about her relationship with a 13-year-old boy in kidney failure; how she was miraculously a perfect donor match for him; and how she and this teen, the son of her boss and close friend, are connected in so many ways, especially through their faith.

One of seven children growing up in Western North Carolina, Rachel has always been an active individual, participating in endurance-type races and challenges and staying very physically fit. Her love of fitness and the outdoors led her to major in Outdoor Leadership at North Greenville University where she graduated in 2011. From age 16 through high school and college, Rachel worked at the Hendersonville Chick-fil-A owned and operated by Joel Benson. She took a year off to travel and do mission work with The World Race: Adventures in Missions where she visited 11 countries in 11 months doing everything from landscaping in Romania to teaching English to children in Cambodia.

“When I came back, I knew Chick-fil-A aligned with my values and beliefs. I loved working there and through conversations with Mr. Benson, I learned what my future could look like. I felt I could take the leadership principles I learned in college and transfer them to a different environment and to my life in general,” she said.

Getting started at Chick-fil-A took some initial coaxing but has made a huge difference in her life.

“In high school I had another job, but Mr. Benson wanted me to work for them just one day a week. I kept saying no, and now I am the executive director over the entire business. That was 14 years ago, and it has been such a blessing. It is such a great business and I have such a great boss who is always teaching me anything I want to learn. I never thought this is where God would have me. I love our team and it is really cool to see it play out like this,” she said.

Through her work at Chick-fil-A and as a sometimes babysitter for the Bensons, Rachel became a very close friend of the family. So, when the Bensons, already with four children of their own, decided to adopt Clay, 4, and Minnie, 10, from China and both with health issues, Rachel moved in to help during the transition and adjustment period. Over the next few years, she grew extremely close with the family even spending numerous family vacations together.

Rachel could not have guessed that her good health and her love for the Benson family would lead her to donate the greatest gift she could ever give—the gift of life through kidney donation.

FROM CHINA TO AMERICA

Wendy Benson said that on a trip she and her husband, Joel, took to the Ukraine years ago, they saw orphans that broke their hearts. Although they had started their own family (now ages 13 to 21), Wendy had it in her heart that God wanted her to help. She said she had an “accountability partner” at church who reminded her to continue to be open-minded and open-hearted.

“She held me accountable,” Wendy said. “As I walked up the driveway one day, I asked God if there was someone out there that needed us.”

When they began work with an adoption agency, all the children available had special needs.

“Joel came home from work one day and I said, ‘I think I’ve found our daughter,’ and he said ‘great.’ We had started the adoption process for Minnie, who is a Hepatitis B carrier, before we found Clay. His diagnosis could hardly be understood, the title was so long. But, we were looking for a son, not a diagnosis,” Wendy said.

When they met him, she said the little boy had mannerisms like Joel’s grandfather and even had a similar name. She said the grandfather’s first name was Hugh; Clay’s Chinese name was Hu Zheng and is now Clay Hu.

“We put in for Minnie and I think Grandpa died in April,” Wendy said. “He never got to meet Clay whose personality is so similar.”

Minnie, who was 10 by the time they started adoption and is now 19, had been found on a park bench as a newborn with her umbilical cord stump still attached. Clay was an orphan from a different part of China who had been left on the steps of a hospital. They estimated he was not yet 2 years old. He had some medical problems that were “more than minimal issues,” Wendy said, and that is why he was left at the hospital.

“We weren’t certain what we were getting into but he was smart and capable and so good looking,” she said.

Once in America in 2010, the child had to have five surgeries to redirect his urinary system, but his organs looked good, Wendy said.

“We were unaware that from his birth he had a kidney disease accelerated by the backflow of his bladder. His plumbing was going in the wrong direction,” she said.

The shock that his kidneys were failing came in April 2019. The teen, who never complains about pain, Wendy said, had some bloodwork that showed his creatinine levels were life-threateningly high. It prompted a call from the doctor for them to immediately get to Mission Hospital in Asheville where an ambulance was waiting to rush Clay to UNC Hospitals in Chapel Hill. There, said Wendy, is where “the most remarkable army of doctors” saved his life.

The news was unbelievable. Clay would have to have a kidney transplant or he would die.

TAKING FRIENDSHIP TO THE MAX

Wendy said when family and friends started signing up to be tested as possible kidney donors, it was no surprise that Rachel, who the couple views as part of their family, stepped up. Rachel and Clay had always had a close relationship. Another family member, an aunt, was tested first but failed to match. Rachel began testing in September and she was deemed a match.

“I definitely think God has knit us all together,” Wendy said. “Her being here when we brought the kids home from China was an answer to prayer. We are all very proud of the way she has helped us more than once in times of need both at home and at the store.”

Even so, Wendy said it is amazing when a person is ready to “lay it on the line” for your child. “It’s an extra debt of love you don’t feel worthy of. It is very humbling,” she said.

For Rachel, learning she was a match for Clay was amazing but also required educating herself on exactly what it would mean for her.

“When he went into kidney failure, I knew nothing about organ donation. It was never really on my radar to do something like that. I had a lot of questions. Would I still be able to have kids? Would I be healthy enough to still do endurance sports and be active? But it was amazing I could give that gift to someone so close to me,” she said.

With her questions answered and reassurance she could live a normal, healthy life after a few months of healing, Rachel was ready to move forward. By the end of December, Rachel said there were no “red flags.” By January, everything was approved and the surgery was set for the 24th.

“I’m the kind of person that when I make a decision, let’s do it. I knew that was what Clay needed and I had peace about the whole thing,” she said.

Both Rachel and Joel Benson documented Clay’s journey on Facebook to keep friends and family informed. On Jan. 24, Joel posted “In about an hour these two will be even more connected than they already are as Rachel donates her kidney to our young man Clay. God is still in the miracle business and we get to watch it unfold today. We covet your thoughts and prayers.”

That was at 7:30 a.m. just before they took Clay into surgery. Later that day, Joel posted this: “Our donor, Rachel, is out of surgery and doing great! She will be glad to hear that her kidney was beautiful and maybe one of the best they have ever seen. On to Clay and the grafting of that beauty to him.”

LEARNING TO STEP UP

Organ donation has now become an important issue to the Benson family and to Rachel.

“I think all of us have it on our driver’s licenses now,” Wendy said. “I think before that, we thought about it as something that happens when you die. To do what Rachel did, I do think is a challenge, and you have to ask yourself what would it take to do that for someone you don’t know. God would have to make it clear and there are plenty of stories where He has done that.”

For Rachel, giving up a few months of her active living is small in the grand scheme of things.

“Giving up my time, the things I’m used to doing, is small compared to how many years I’m going to live and that now Clay can live, too,” Rachel said. “It’s not that long to be able to give someone else life. You have to keep it in perspective.”

Rachel said she would encourage anyone who is given a similar opportunity to do it. “It’s really worth it overall. Seeing Clay energetic and healthy provided a profound moment that it was completely worth it. I’m very glad I did it. It is just a miracle!”