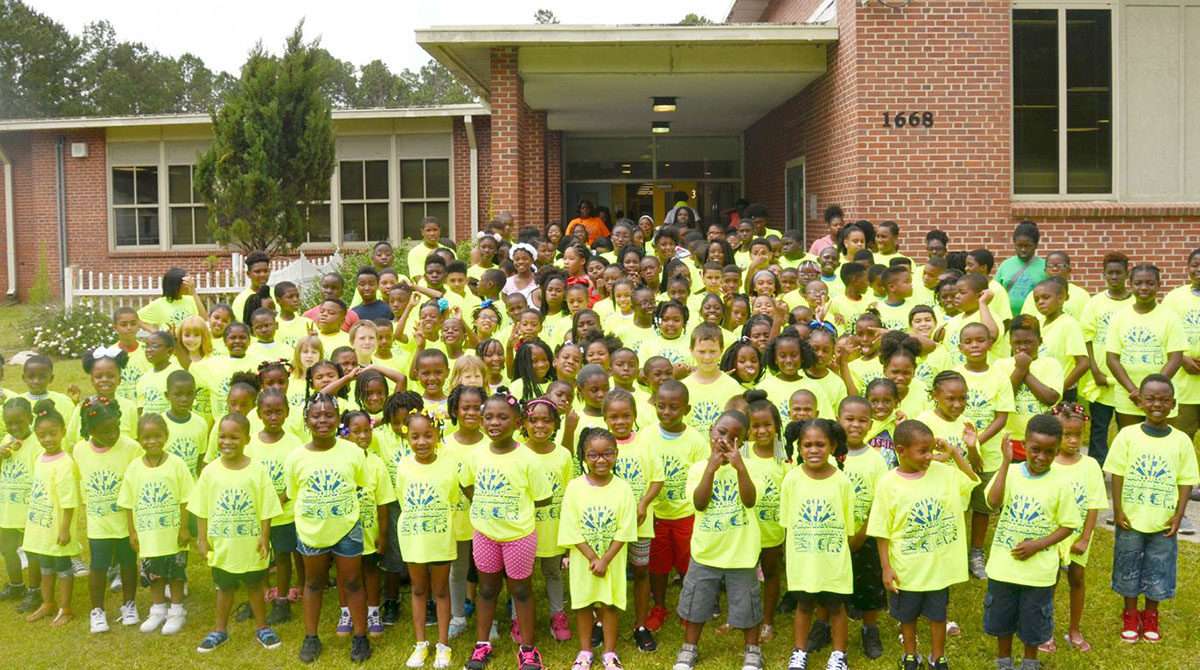 Growing up in Plantersville, South Carolina, with seven brothers and sisters, Ray Funnye realized the importance of family and community. Although he left his rural hometown to pursue a civil engineering technology degree from Savannah State University in Georgia, earned a master’s degree and worked in the City of Atlanta and St. Croix, a U.S. Virgin Island, for 14 years, his love of family and small town living eventually brought him back home.

Accepting a position with the County of Georgetown in 1992 as Plans Examiner and subsequently as Director of the Public Services Department, Ray oversees everything from the county’s solid waste to the airports. However, it is his non-paying job as Executive Director of The Village Group, a nonprofit that sponsors the largest summer slide program in Georgetown County that reveals his passion for youth and community.

IT TAKES A VILLAGE

Growing up in a rural area historically known for plantations and rice fields, Ray was kept busy working his family farm.

“Dad had just enough land to keep us busy with planting tobacco, corn, cucumbers and even picking cotton,” Ray said. “As a younger person, I learned appreciation for hard work so I decided to go to college.”

While living in Atlanta after college, Ray became involved with the Big Brothers Big Sisters program. Often representing the engineering firm where he worked on high school career days, he would encourage youth to do their best.

“The Big Brothers Big Sisters program set a fire under me because I was involved in helping young people,” Ray said. “I always wanted to be a change agent for the community.”

After working on a reconstruction project in the Virgin Islands after Hurricane Hugo, Ray returned to Georgetown for his brother’s funeral. While visiting, he received the job offer with the county. He married Queen, his high school sweetheart and they spent some time growing their family. Ray said it was while playing baseball alone with one of his two young sons that he realized there was a need for involving other people in his children’s lives.

“I said I really have to find a way to make this ball playing a more enjoyable experience. So, I invited other men and their kids and wives and we became a group of people with a common interest doing something very fun and relaxing. That’s when I realized we had something good,” he said.

In 1995, Ray turned his idea of bringing people in the community together to work for the betterment of area youth into a nonprofit organization. Since Plantersville is divided into several villages with Jackson Village being headquarters for the grassroots organization, the name The Village Group evolved.

“We are all from the village working for the common good and for young people to have quality of life,” Ray said.

The Village Group is designed to engage low-income youth in programs that are both educational and fun. A host of volunteers took the organization from holding fundraising fish dinners and chicken dinners to survive financially to submitting grants to foundations and corporations and engaging individual donors. They started out holding back-to-school rallies to help ensure all children had the school supplies they needed to be successful. With a 14-year history of success, The Village Group now operates with an 11-member board of directors and only one paid Chief Operations Officer who came on staff last year.

“I love what I do but I told my board last year we were so busy doing so many things, we had to do something before we started missing opportunities,” Ray said. “I take both my missions—my job and my volunteer work—very seriously. It was time to bring in some help so we hired Nanci Conley to handle the day-to-day operations.”

There are many parts to The Village Group. Working with Plantersville Elementary School, an after school program was developed and in summer is opened up to youth from across Georgetown County in grades K-9. The Plantersville Summer Academy this year has 258 children who are bused as far as 15 miles so they can participate in the program. In addition, the nonprofit offers LIFE (Literacy is for Everyone), Village Flyers Bike Club, Young Engineers and Aviation Education Career programs designed for youth development

Certified teachers are hired to work with children the first few hours of the day to help them avoid what is termed the “summer slide.” The program encourages them to be lifelong learners while providing a safe and nurturing environment. The goal is to ensure more of Georgetown County’s youth graduate high school and have career goals.

“Summer is when children lose what they gained over the school year. We help keep them academically focused through a structured classroom program. Historically 98 or 99 percent of American children have a significant slide,” he said.

While education is an important focus, enrichment education is also a big part. Children are exposed through field trips to jobs that might be available to them if they continue their education.

“We have presenters and take field trips,” Ray said. “This year we’ll host aviation week and visit the Myrtle Beach Airport. The kids will be introduced to all the intricacies of the airport, including the fire station and the FAA has invited us into the tower. We will also visit Pittsburgh Institute of Aeronautics. Boeing will come visit us to make a presentation.”

Ray also takes the youth to the Georgetown Airport where he arranges for some of the kids to take their first flight.

“While we will encourage our kids to develop an interest in aviation, there are so many other jobs and we want them to become well rounded and use whatever skills they have,” he said. “We introduce them to the full spectrum of jobs exposing them to things they might not otherwise be introduced.”

Education field trips in the past have included visits to historical sites such as Selma, Alabama, where the youth learned about the history of voting rights in the United States. To make life fun, trips to places like Niagara Falls, New York, are taken as well.

Active engagement is a key factor in the success of The Village Group. A mentoring program called the Village Flyers is a bicycle club that brings young people together for a fun activity while being mentored, Ray said. For the past two years, the group has sponsored the Annual Tour de Plantersville cycling event. Riders participated in a 10, 25 or 40-mile excursion through the rice fields of pre-Civil War plantations, along Georgetown County’s only scenic byway capturing its rich rice farming history and exploring various Colonial-era landmarks.

“Young people are at the heart of The Village Group,” Ray said. “We do everything with them in mind and we recruit volunteers with a passion for young people.”

For Ray, his part in founding and heading up The Village Group is simple, he said.

“We are all going to have to pay. We can pay now or pay later. If we invest our time and resources to help our youth, we will grow dividends. Paying later is when problems arise with our kids. The social investment I am making now helps my community and me. We are socially invested for the good of community and although I am pretty busy, I have to make time for others.”

Ray said his life is full but he felt a need to “reach back and pull somebody else up. It is very satisfying to feel you have made a difference in the life of a young person.”

More information about The Village Group programs and its Tour de Plantersville fundraiser can be found at TheVillageGroup.org.