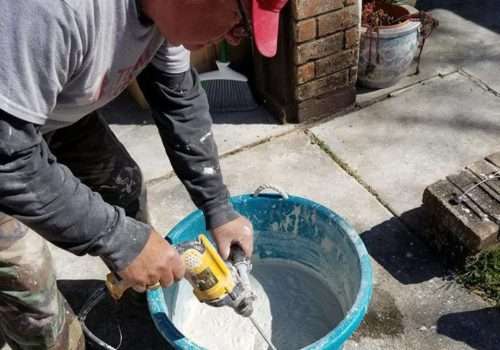 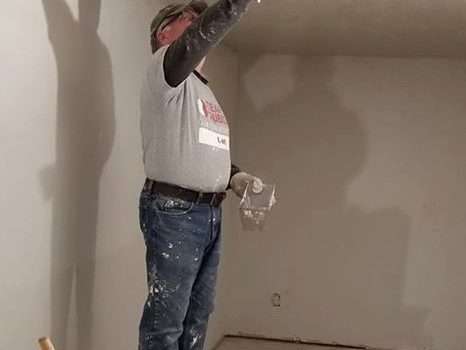 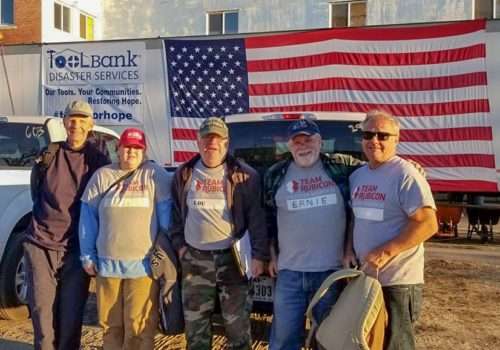 Lou Palm finds himself traveling across the United States these days, “mucking out” houses that have been flooded, tearing down damaged walls or plucking protruding nails from studs or soggy flooring. For Lou, it is a passion to help families facing the overwhelming trauma of rebuilding after a major disaster. Perhaps, even more importantly, it is the opportunity to support an organization created to help struggling veterans regain their purpose in life.

As part of Team Rubicon, a nonprofit founded by two Marines in 2010 following earthquake devastation in Haiti, Lou has found his niche in the volunteer realm after a long career in the military and the corporate world.

FROM NEW YORK TO VIETNAM TO VOLUNTEERISM

Born and raised in Niagara Falls, New York, to a family struggling to get by like many Americans, Lou said volunteering was not something he learned at home.

“My family was just trying to survive week to week. Maybe because I was blessed with a good family, I was instilled with the need to give back,” he said of his dedication now to volunteerism.

Like so many young men in the late 60s and early 70s, Lou graduated high school and entered the Army. That was in October 1969 and during the Vietnam War. For the next 27 years, he served his country including a tour in the war as a medic at which time he became engaged to his high school sweetheart. The last 19 years of his service were with Special Forces where he was a medic and team sergeant. His job involved travel to 11 foreign countries and Washington, D.C. and along the way, he completed college and earned an MBA.

He retired from military service in 1997 as a sergeant major.

Retirement was not an option for this energetic man who then entered the corporate world working for the Oak Ridge Institute for Science and Education as an energy contractor. Part of his experience involved managing a Homeland Security Exercise for the State of California and conducting readiness exercises with partnering agencies like the American Red Cross.

“I was impressed with their (Red Cross) staff and volunteers,” Lou said. “I felt after leaving the corporate world, the Red Cross would be a good fit.” By then, he and his wife, Donna, had a home in North Myrtle Beach and he was traveling back and forth to Sacramento and spending time at Quantico with the FBI. He decided to retire for a second time in 2009 and with nothing to do to stay busy, he became a Red Cross volunteer.

“I volunteered as a Disaster Action Team member. That is the most critical program and the area that helps families the most on their worst day after a home fire or other disaster,” he said.

His skills were quickly recognized and he was soon approached for a position in the organization that lasted eight years placing him in various leadership roles before retiring a third time in October 2018.

Combining all his experiences from military service to disaster leadership roles made Lou the perfect candidate to be a volunteer leader with Team Rubicon.

In September 2018, he applied for training with Team Rubicon and by the first week of November, he was deployed to help with flooding recovery in Wilmington, N.C. He then spent eight weeks in Florida assisting families affected by Hurricane Michael and has deployed for four weeks to Panama City helping with the rebuilding. He has assisted with a rebuild in Houston, Texas, where homes were damaged by the 2017 Hurricane Harvey and most recently assisted in Iowa and Nebraska where flooding from the Mississippi River caused devastation.

His work has included demolishing houses too damaged to rebuild and such things as removing trees blocking entrances or damaging roofs.

As a healthy 67-year-old, he is happy to do the hands-on work that can help families get back into their homes and back to a normal life. He is especially glad to know he is part of an organization that offers a way for veterans, retired law enforcement and emergency responders to give back to their communities in a productive way.

“Team Rubicon volunteers consist of 70 percent military veterans, 20 percent fire and law enforcement veterans and the rest are people who want to join a program and help others,” Lou said. “Team Rubicon USA is a World Health Organization and an approved international disaster organization.”

For Lou, Team Rubicon is his way to give back and a way to help veterans who may have had a difficult time regaining a normal life after deployment into dire situations.

Although he has been with Team Rubicon a relatively short time, Lou has been able to use knowledge gained from his military and disaster response experiences to become a volunteer leader. Team Rubicon has named him the South Carolina State Administrator for the organization.

“In South Carolina, we are revitalizing the program. It is my charge to grow the program and to partner with others,” he said.

Whether it is collaborating on smoke alarm blitzes, recruiting new volunteers, or meeting with city coordinators, his job is to move the organization that just received the National Volunteer Organization Active in Disaster (VOAD) Member of the Year Award, forward in the state.

“We are starting to get a growing movement here in South Carolina,” he said. “North Carolina has an extensive training program and we are trying to model that.”

Team Rubicon has representation in all states and South Carolina is part of the Southeast Territory. Lou said in his role, he meets with emergency management and other state agencies and attends national conferences.

“We want to show our value to the community,” he said. “We can get into a community quickly to help by putting mature, hardworking volunteers in the field doing hard work. Taking down trees and mucking out houses is tough and demanding work but we stay in an area as long as it takes. You can do a lot of work when you are deployed.”

Lou may have retired for the third time last May, but this May and going forward, he is joyously packing his bags and hopping planes to all parts of the United States and walking into situations where living conditions can often be almost unbearable. A dedicated volunteer, he is ready to help as needed.

“I think I am value added to the community. I am very humble and grateful for what I have and want to share my experiences and leadership ideas and techniques. When you get spiritual and Biblical about it, we are here to help each other,” Lou said. “That is what God wants us to do. So I do it.”