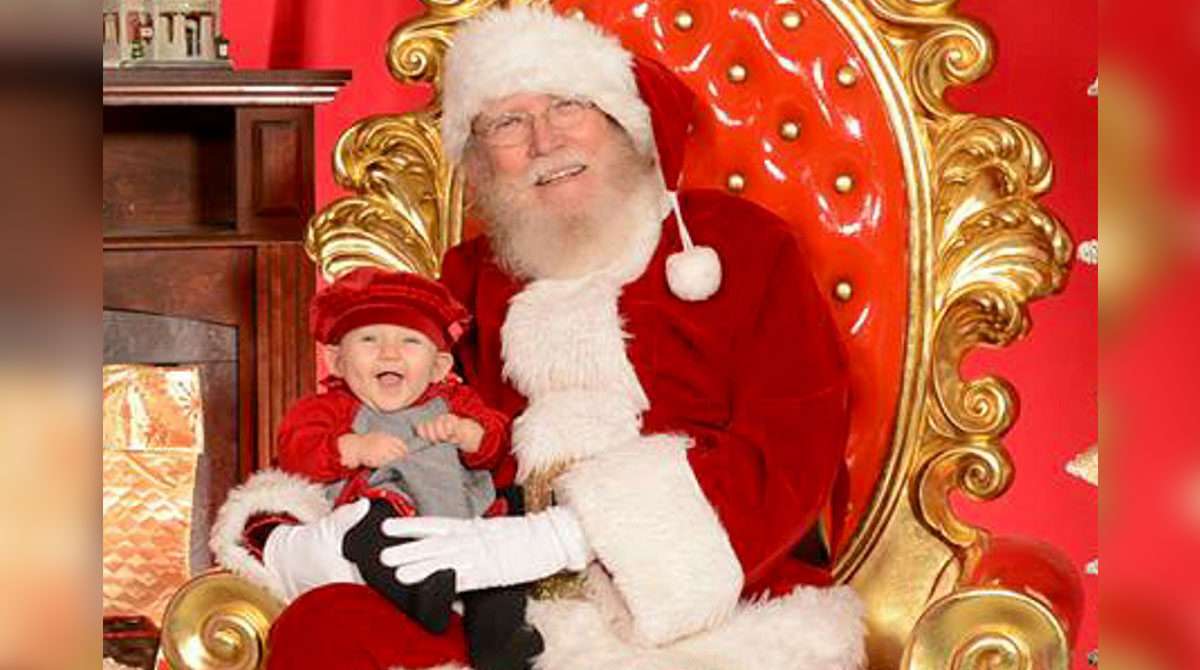 Being Santa is no easy job — especially when you are a Real Bearded Santa who looks the part year-round. For Richard Gainey, a professional Santa who frequently shares his special talent as a volunteer, being Santa has enabled him to bring joy to thousands of children and adults for more than a decade.

An associate professor of multimedia journalism at Western Carolina University in Cullowhee, North Carolina, for seven years and at Ohio Northern University in Ada, Ohio, for 27 years, Gainey currently serves as an adjunct professor at Florida State College in Jacksonville, Florida. Originally from Jacksonville, Richard moved to Fernandina Beach with his wife, Becky, after retiring from his Ohio teaching position and as general manager of WONB-94 FM in Ada in 2015.

His position as Santa Claus, however, never changed.

PUTTING ON THE SUIT

As a broadcast management student at Jones College in Jacksonville, Richard enjoyed being involved in theater. His love of theater began in high school and has carried into his career as a professional Santa. He has been able to utilize his theatrical training as well as broadcast communication experience he gained as an interview host for a South Carolina cable TV show.

“Being Santa is very much theatrical – the makeup, the costume and telling lies to children,” he said with a bit of Santa humor. “I think of the world of Santa as theater and it really is.”

Richard said he never thought about being Santa until he was leaving a shopping mall one day in Fort Wayne, Indiana. A little girl stopped him and asked if he remembered her from the day before when she sat on his lap. He, of course, said he did and played along.

“Growing up, I had a couple of pictures taken with Santa but it never occurred to me to be Santa until I started looking like Santa and people started thinking I was Santa. So, I started living up to the expectations,” he said.

In December 2005, Richard donned the “red suit” for the first time. An animal lover himself, he was happy to play his first Santa role for a nonprofit spay-neuter clinic fundraiser. He found a discounted Santa suit for $50 and used a fake beard.

Before the day’s end, he ditched the fake beard and decided he would have to rely on a real beard if he was going to make this a profession.

Of the suit, Richard said, “It was a cheap boxed suit and I still have it,” adding it is one of four Santa suits he owns that include Santa casual with red shoes, winter casual and summer casual with shorts and a Hawaiian shirt.

TRAINING TO BE A REAL SANTA

Deciding to be Santa Claus is a true commitment, Richard said, and one he takes very seriously.

Although he said serving as Santa is a hobby and not a job, he has made sure he knows how to present himself well. He is a graduate of two schools and has a “Master’s of Santa Clausiology.”

The classes help potential Santas learn about makeup, bookkeeping, finances and hair care, he said. He also has to be insured and follow safety rules like keeping his hands visible at all times when he has a child on his lap.

“There are secrets you can’t let out like keeping your nose hairs trimmed for when children are looking up at you,” he said, once again with a humorous inflection in his voice. “There are a lot of different things you can use. I have keys on my belt and I tell kids one opens the mailbox, one is for the toy room and there is a golden key that opens doors when there is no chimney.”

While Richard is a somewhat thinner St. Nick than some, he finds the use of his three fake stomachs helpful in rounding him out for the role and to give him a healthier appearance. He also uses cologne that smells like peppermint or cinnamon cookies.

It can take more than an hour to transform himself into the jolly fat man but when he puts on that suit, Richard said “it is kind of magical.” He is no longer Richard Gainey.

His real beard and hair can be whitened during the season to enhance his Santa appearance but because he carries the resemblance all year, he is always aware of his obligation to provide a good image of the beloved Father Christmas.

“I live up to the reputation year-round. I don’t want to appear around alcohol or smoking,” he said.

He wears Santa-type socks most of the time and a lot of red, which turns heads when he is out and about on a normal off-season day. He has become accustomed to people staring at him.

SANTA LANDS IN THE SAND

During his time in Ohio, Richard was a member of the Buckeye Santas, a group of more than 100 Real Bearded Santas. He served as president of the organization, sat on its executive board and operated as the group’s webmaster.

In 2014, while Richard was a Bluffton (Ohio) Area Chamber of Commerce member, he was recognized by the Ohio Bureau of Motor Vehicles for his personalized plate, ‘ST NIK.’ He is also a member of The Nationwide Santas.

When Richard and Becky moved to Florida, he became involved with the Florida/Georgia Santas, a chapter of the International Brotherhood of Real Bearded Santas. His work, whether volunteer or paid, takes him to businesses, restaurants, libraries, hospitals and other locations where he shares a little holiday joy.

“Some jobs are paid and that covers the expenses to do free visits such as going to senior centers every year,” he said.

For the last three years and for this upcoming holiday, he will play Santa at the Bliss Cupcakery in Fernandina Beach where he typically chats with a constant flow of 300 to 400 children, leaving Santa no time to even take a restroom break. He visits patients at Quality Health Care and the Nassau-Fernandina Senior Center. He has served as Santa at the Jekyll Island Club Resort and he loves to read stories to children at the Fernandina Public Library. He has worked with the 12 Days of Christmas in Nocatee and the Enchanted Christmas Village.

For anyone in the hospital over the holidays, they will definitely get a visit from Santa Richard.

He also schedules time with military groups. He has had his photo taken with children as young as four months old and had people propose in front of his Santa chair. He has heard some very touching stories from small children sitting on his lap and whispering in his ear, he said.

Richard enjoys making private home and business visits. One of his greatest joys, however, is helping a cause dear to his heart. His website, www.PetLovingSanta.com, reflects his love of animals and a portion of any money he earns appearing as Santa Claus is donated to animal rescue sites and spay-neuter clinics that include River City Community Animal Hospital, Carol’s Ferals, Deb’s Dogs and other local animal rescue sites.

Being Santa is “a special calling” for Richard.

“You can’t be in it for the money. It is something that you really have to enjoy doing. I won’t do this forever but I’ve made a lot of very nice friends doing it so far,” he said.