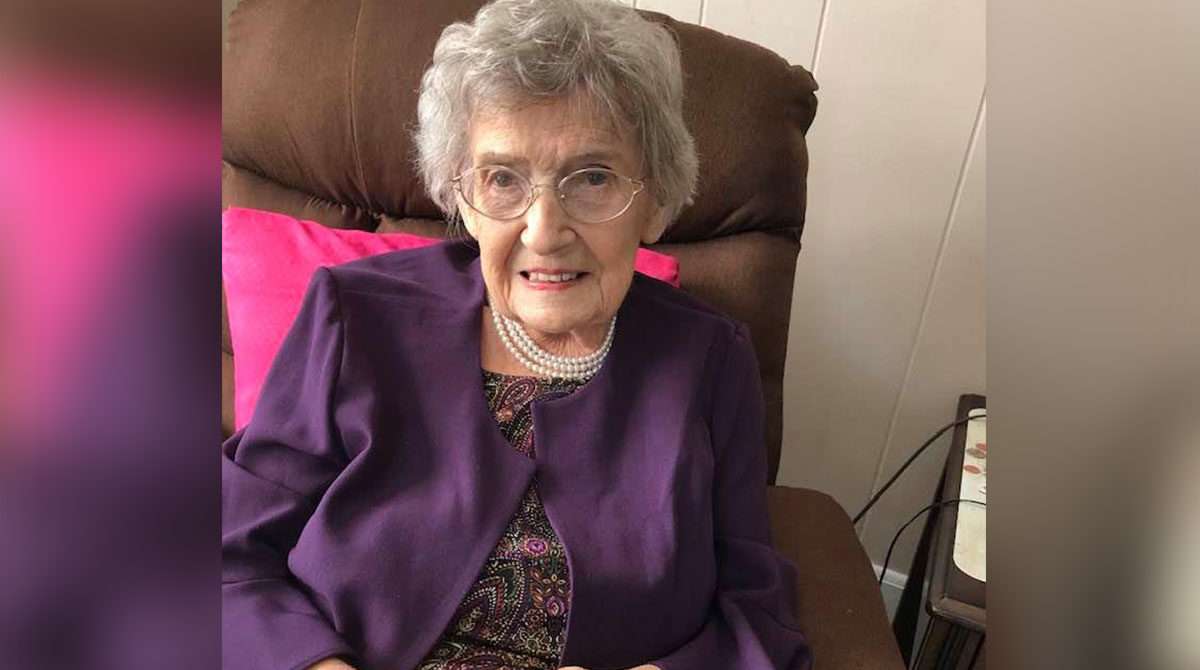 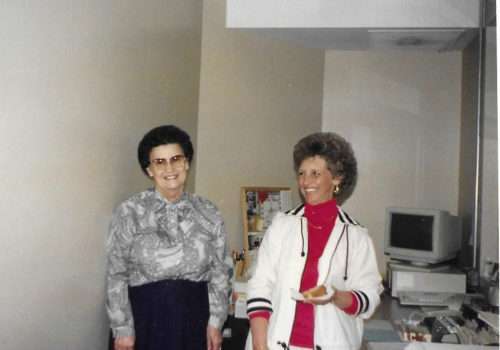 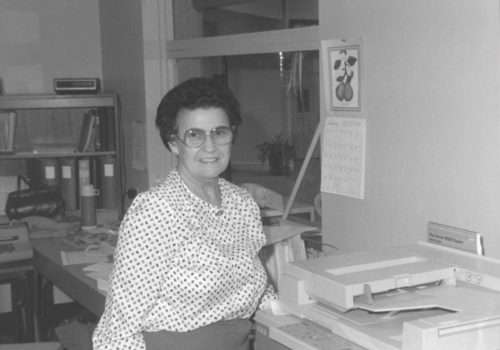 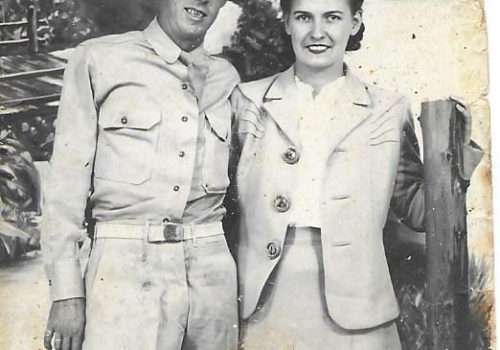 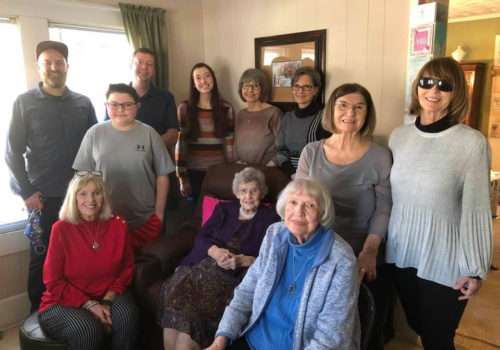 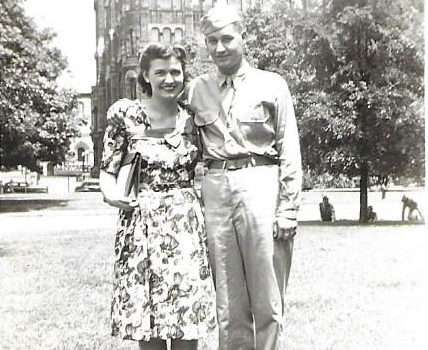 The second child of 13 born to Narvie Washington Ward and Lula Azalee Ashe Ward, Ruby Virginia Morgan spent most of her childhood helping her mother raise the younger children in the home. That was not unusual for families living in the rural mountains of Western North Carolina where community service was hands-on, helping family and neighbors in times of hardship and need. Giving back meant pitching in to assist a neighbor that lost their home to fire or lost essential crops from flooding leaving little for the family to eat. It meant spending nights “sitting up with” and consoling mothers and fathers who lost children when disease ravaged the community. Philanthropic acts during Ruby’s 100 years of life were primarily based on the giving of time, sweat and tears, rather than on donating money, which was often in short supply.

Born Feb. 21, 1921, Ruby was reared in Jackson County, North Carolina. In her early years, her family lived in the Barker’s Creek area in a rented house while her dad did share cropping, growing wheat that was ground into flour and keeping one-third of the potatoes and vegetables grown to feed the ever increasing family.

At a young age, Ruby moved with her family to a house on the other side of the river where homes still had no electricity to operate things like washing machines. “I wore my fingers out on the scrub board,” Ruby said of helping her mother with the laundry, which included boiling clothes in a big black wash pot outdoors. As a teen, she had to miss two days a week of school to help “watch the kids out of the fire. We didn’t leave anyone unattended,” she said.

While the family was poor, Ruby said the children knew little difference.

“Everybody back then was just like brothers and sisters. We were all poor. It was the depression days. People borrowed from each other. We always had a huge garden and we had chickens so we always had eggs. The storekeeper would take the eggs instead of money and would let families pay when they could. With good credit, you could get anything you wanted at the local store,” she said.

Neighbor helped neighbor and everyone got by the best they could. The men often swapped work. “Daddy would go plow a neighbor’s field and then someone would come help us,” she said. “People helped each other.”

There were few cars during her childhood and Ruby said the kids would walk to school along the railroad track being mindful of the trains and staying close to the edge of the highway.

“Sometimes we wouldn’t see a lot of cars but we could hear them coming because they made a lot of racket,” she said.

She was able to finish seventh grade before she was forced to quit school. Her eldest sister had married and as next eldest girl in the family, she had to help her mother with all the little ones, which included a set of twin boys.

With little transportation in the rural mountains, Ruby said families had to rely on the kindness of residents who owned cars. While doctor home visits were common, the owner of the local grocery store and a few others had vehicles and were always willing to carry the very sick up to the town of Sylva where there was a hospital and medical help. During WWII, there was gas rationing which made it even more difficult to get help for those who needed hospitalization. Ruby recalls her brother getting whooping cough and her dad had to flag down state highway workers to get transportation.

Back in the day, Ruby recalls neighbors coming over to listen to the Grand Ole Opry on the battery operated radio and enjoying social time together. Especially during the war, she said, they would gather to listen to war news and children were not even allowed to speak so no news was missed. So many families were losing sons to the effort, it was important for families to support each other in any way they could. Ruby’s younger brother, Kenneth, died in France shortly after deploying to help with the fight. She had earlier lost a little brother, age 3, after he took ill.

“There was an epidemic and small children were dying. I was 14 at the time Freddie died,” she said.

When a family suffered a loss, friends and neighbors brought in food and individuals from church would come and sing. “They didn’t leave you alone to grieve by yourself,” she said. “They came to comfort you.”

Ruby said it is sad that neighbors don’t gather and talk like they used to. Some people, she said, don’t even know their next door neighbors.

“I wish people would,” she said. “I think the reason they don’t is because people don’t live beside each other a lifetime like they used to, and I think people are afraid of each other.”

Looking back, she said, even though life was often a struggle, she thinks people enjoyed life as much or more then as they do today.

With WWII raging from Sept. 1, 1939 to Sept. 2, 1945, most healthy young men had been called to serve their country.  Her brother, Kenneth, was eager to serve and was sent to Virginia to the shipyards. At only 19 years old, Ruby – who had ventured little past her small hometown – joined dozens of other young women who were recruited to work for the National Youth Administration (NYA) program. The NYA was begun during Franklin Roosevelt’s presidency hiring women to make quilts and other items as part of a welfare program to be given to people in great need. Until then, most women had not been able or allowed to take jobs outside the home.

Ruby was working for the NYA making a little spending money when she received an opportunity to travel to Greensboro, North Carolina, to take 13 weeks of defense training to operate a machine that would produce war materials.

“I got something in the mail and I told Mama, ‘Everybody available can go to war.’ I told her the money would come in handy and this would be a good time for me to go get a job. Mama cried. She thought I wanted to get away from home but she said to go. She knew I had had a hard time,” Ruby said.

They put Ruby, her friend Lucille Nations and other young women from the area on a Streamline bus. “I’d never been on anything like that except a Greyhound bus one summer,” she said.

It was a brave move for a young country girl with little knowledge of life outside her own community.

When a need arose in Richmond, Virginia, Ruby was slipped in to fill one of the 13 open positions even though she had finished only seven weeks of her training, she said.

“We came in on the James River and they had already arranged places for us to stay. The man said he would be wearing a white flower in his lapel so we would recognize him. We got off the train at the depot and he was on the platform with a big flower in his lapel,” she said.

Ruby said she and her friends, Lucille, Hazel Cook and Emma Ball all made the trip together. It was an exciting time for the young women who wanted to do their part for the war effort. Ruby had to borrow money from her Army-enlisted brother to buy clothes for the job which included working an assembly line and doing inspecting. The factory was making parachute bags for food drops, she said. Another job with Reynolds Metal Co. included chopping up tinfoil that was dropped from the sky to create static that helped keep the enemy from hearing the planes coming, she said.

On July 14, 1944, Ruby said she and the other female workers received a telegram telling them their jobs were over. The military no longer needed the tinfoil. By then, Ruby was married to Basil Morgan, an Army soldier she met in Richmond who was sent overseas, so she took a job at a Liggett & Myers cigarette factory cutting cigarettes to length and placing packs into boxes while waiting on her husband to return stateside.

After the war, Ruby and her husband settled in Tennessee for a while near his family and later in Michigan but eventually returned to Western North Carolina to establish their home in Bryson City where the couple raised four children. Ruby spent 25 years at what was Skyland Textile and then Buster Brown Apparel sewing plant in Sylva before retiring to care for her sick husband. After he passed in 1982, she went back to work with the Swain County Senior Center program.  She worked an additional 20 years, taking off only a year and a half when her son Don, a Vietnam veteran, fell ill with a brain tumor and died.

Ruby worked until she was 84, many of those years operating the switchboard at the Swain County Administration Building. “That switchboard was the best thing that ever happened to me in a way,” she said. “I got to know everybody and all their numbers. I remembered them by just visualizing them.”

The proclamation reads in part: “During a long and productive lifetime, she has demonstrated in countless ways her dedication to the welfare of others and has earned the respect and affection of people from all walks of life and all ages.”

When asked to reveal her secret to a long life, Ruby says simply, “I am here by the help of the good Lord.”